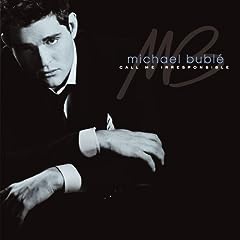 It Had Better Be Tonight is one of my all-time favorite songs, ever since seeing/hearing it in The Pink Panther. I’ve heard various versions, usually my favorite is the one by Lena Horne but Michael Bublé is doing a cover on his new album and I’m eager to hear it, mainly because I’ve only ever heard the song performed by women (or that strange mixed chorus that sounds like eunuchs or angels in the Mancini Way) and while it’s kinda sorta a love song, it’s really a lust song. So I can hardly be blamed for wanting to hear it done by a dude.

Amazon has a video with Michael discussing the song from his forthcoming album and he’s just such a cutie but he might be overplaying it a bit as I’m not exactly getting the hetero vibes from him, but I’m not complaining either. But he says it like it is, the song is saying we don’t have time to waste, if we’re gonna do it, let’s do it now. Of course this is the man who in concert said that singing “The Way You Look Tonight” was more for the guys for the ladies, primarily because they were probably dragged there by their women and if he had one wish that night for the guys it was that this song got them laid. I confess… it worked. It had Matthew playing Bublé’s cd a lot more often when I came over, too.

Last night I imported and tagged all of my Ultra-Lounge cds into iTunes, I’m only missing 2 or 3 from the set and those are compilations they released since 2000 so they shouldn’t be as difficult to find. My iPod’s filled with over 2 gigs of hip & swinging tunes today and I love it.