In the corporate neon daylight of Seventh Street NW at night — amid the welter of pubbers, clubbers, field-tripping suburbers and howling sports fans — there is this strange new (and retro) evidence of renaissance in Washington: You can go bowling again. 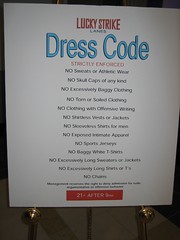 This is a very nice review of the bowling alley and its offerings. And I’ll go on record saying that I am extremely happy that a bowling alley has come to the district. However check out the dress code, which flickr user sbma44 took on their opening night. 13 “No’s” on the list, which most are taking to mean trying to shut out the non-rich, non-yuppie or non-white crowd, a definite possibility considering the recent makeover of the Chinatown area. Especially the “no baggy white t-shirts,” a Lucky Strike fashion don’t clearly identifying black or “urban” youth fashions.

But I digress (*cough-classist-cough*)… There are 14 lanes. 14. What this means is you better really enjoy their drinks and food because if you arrive say around 8pm on a weekend evening, you may not be bowling until 10 or 11 if you’re lucky but more likely midnight. And you’ll pay $8 a game and $4 for shoe rental for the privilege.

It looks like a nice mid-to-upscale lounge bar with restaurant that, as an afterthought, someone added bowling lanes and pool tables to. Ok, back to the dress code. It doesn’t explicitly say no jeans or no t-shirts, and this is a good thing, because as someone that bowls on a league where the equipment is somewhat maintained… bowling is dirty. The lanes are oily, the pins are dirty, the mechanism returning your ball to you is dirty and oily. We use towels for both our hands and our bowling balls. So feel free to bowl, just be careful of that natural motion of wiping your hands on your pants, especially if the ball takes a while to come back.

The new bowling in the new Washington is an affirmation: You are so hip. This follows you right into the restroom, where the walls are lined with clips from celebrity magazines picturing Geena Davis, Paula Abdul, Matthew McConaughey, Kelly Osbourne and Jessica Simpson bowling at the Lucky Strike on Hollywood Boulevard.

But who in the crowd of hundreds Friday night looks like that? It’s mostly wonky Washington — neckties still in evidence! — traveling in packs defined by workplace. A law firm occupies four lanes for a private party. A trade organization stops in for drinks. Three Hill spokespeople and one non-Hill friend stop by after watching “Syriana” and bowl for an hour. Two of them live a couple blocks away, a neighborhood where four years ago squatters occupied desolate buildings and today one-bedrooms rent for $2,100.

The article interviews people who think it’s cute and hip and kitschy and others who are “vintage bowlers” (read: people who own way too many bowling shirts, but almost never bowl). It seems to be going over well, and Jenifer and I are going tomorrow night for a zipcar sponsored party with reduced prices on bowling, but after that I doubt I’ll be going again. Mainly due to the size since I like going to Strike Bethesda with over 30 lanes. Going to an alley with 14 lanes and expecting to bowl right away is like the group of 10 after a movie outing that wants to go somewhere to eat, but doesn’t want to wait.

There was a tone of amazement in the conversations floating around the complex — a sense of Where are we, Toto? What little China was left in Chinatown has all but vanished, along with the last of the empty lots and abandoned buildings. The once gaudy-by-comparison Chinatown arch looks unexpectedly plain. Someone in the passing rush blurted out a depressing verdict, meant to be chipper: “It’s almost like you’re in Arlington!”

I figure it’s only a matter of time before they take down the arch and start scrubbing the word “Chinatown” off the metro signage.