Table for One – District Chophouse 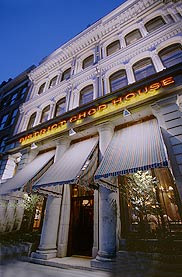 Last night I took myself out for dinner at the District Chophouse. There wasn’t a special occasion, I just felt like having a nice dinner out instead of heating up my apartment making something at home. I did have a fairly rough day at the office though, Betsy was out which left me in charge. This isn’t really a bad thing, it just changes the scope of my work for the day, instead of doing things myself, I have to manage other people doing things.

I don’t really have any qualms about going out to eat on my own, it’s clearly more fun with people because you have someone to talk to and someone to try other dishes and share things with. I suppose the lone diner has a bit of a social stigma as well, not necessarily from the staff but other patrons, I got a few looks when I pulled out a book, but nothing major.

I can’t say that it was the best meal I’ve had there, as I know they can do better with different cuts of meat, but I figured that it was a fair place to start my Table for One series as I was familiar with it, and was trying new dishes. And this is not meant to imply that I don’t want to have dinner out with people, but sometimes it’s easier to avoid trying to navigate schedules and free time and just make reservations for yourself. Plus I was amazed at how fast all my dishes came to the table, that rarely happens when I’m with other people, even though we usually finish our food as fast. I had a book with me, so I wasn’t exactly wolfing down my food.

Next up… I’m thinking Indique.