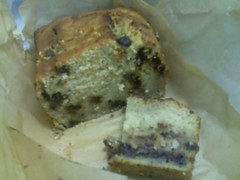 Or so says a co-worker of my banana bread. I didn’t take photos because I’d forgotten just how fast and easy it was to assemble, and then I found out the light in my oven has gone out, still, at the rate it’s going, there may not be any left by the end of the day and that was the whole point of bringing it into the office. That and getting rid of the overripe bananas before they started to walk around on their own. Recipe follows, I’m not a big fan of nuts in mine so I opted for chocolate chips this time, normally I leave filler out completely.

Pour batter into prepared pan. Bake in preheated oven for 1 hour, until a toothpick inserted into center of loaf comes out clean.

It’s tasty, I think I might have baked it a little longer than necessary, but the first two toothpick (angel hair pasta) attempts both came out goopy, so I kept going 5 mins at a time. I also used that “brownulated” sugar instead of the regular brown sugar. It’s just easier to deal with and I think my regular batch of brown was already a brick. The office mates certainly seem to love it. I just wish I’d remembered to take a photo this morning instead of my camera phone a few mins ago.