The Right Way, the Wrong Way and the Max Power way… 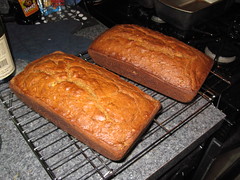 I saw BK in a meeting today and he mentioned that I hadn’t written anything in a while. I didn’t really think anyone would notice, but I’ve been pretty busy and then some of the weekend I got kinda sulky, and then I got kinda sicky-poo feeling, and then I came back to work-work-work and I just haven’t had much time. I’ve fallen behind on happenings in the news, my RSS feeds are totally abandoned and about all I can keep up with is tv/TiVo and starting to take some exercise at home. Oh, and baking — I’ve managed to get a few good things out of the oven with plans for more and I’ve been better about scanning in recipes I like from magazines, newspapers and other sources. I’ll OCR it all one day and import it into a cookbook program as soon as I find one that I like, preferably two. One for Mac and one for PC that can export/import to each other in a friendly fashion.

As a nod to my entry heading, I point to reactions to Tim Hardaway’s mouth-off, for which he has since apologized, backtracked and basically made himself look like a stupid asshole. “I didn’t mean hate…” — Gee Tim that is a pretty easy slip to make, uh-huh.

Right Way — Charles Barkley: “One of the stupidest things I’ve ever heard another person say… especially coming from a Black person.” | Queerty

Wrong Way — Hardaway’s anti-gay comments is how most Black Americans feel about Faggots | Black News Weekly. I love how they capitalized faggots there.