Gary Gygax, one of the co-creators of the Dungeons & Dragons role-playing game, died Tuesday morning at his home in Lake Geneva, Wisconsin, according to Stephen Chenault, CEO of Troll Lord Games. Gygax designed the original D&D game with Dave Arneson in 1974… 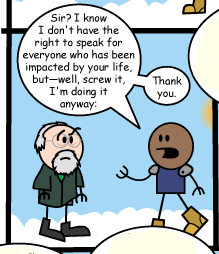 “Failed saving throw” jokes aside, it is pretty sad. Clearly the concepts and culture he helped to create will never really die and many games today owe their very structure to D&D. Even all of those MMORPGs that don’t really deserve the letters RPG in their description. My first introduction to D&D was in my friend’s formal dining room — all of our houses had them back then and no one ever ate dinner in them. We had papers strewn about, photocopies of entire chapters distributed among us and I was completely lost. They made the mistake of letting me DM an encounter and I was giving stuff away that I shouldn’t have, it was a disaster… but I got better.

Rich Burlew, artist of a fantastic D&D based webcomic Order of the Stick, did a lovely tribute to Gygax in his most recent strip.

I met him once, at Dragon*Con in Atlanta what seems like a lifetime ago (and my first and last attended Con ever) and he was so cool but really friendly and odd as it sounds, still surprised that people were so into what he’d created. Somewhere in one of my boxes is a character sheet with a “Ring of Dungeon Master Control” treasure item added and signed by Gygax himself. I wonder how many people tried to use those in their campaigns. 🙂

I do miss gaming around the table with character sheets and huge reference books and friends, but my more recent experiences have shown that it’s the kind of thing that is easily derailed. Not that one still needs to be a colossal committed geek/nerd, but one does at least have to have time for it. These days it seems easier to sit at the PC and let the computer make all the rolls while you click the same few buttons over and over again. Not saying that can’t be fun, but for some games the limits of creativity end at what color to make your costume.

Maybe I don’t really have time for gaming these days, but every now and then when I peek at my gaming books collecting dust on the shelf… I miss the dungeon crawl.