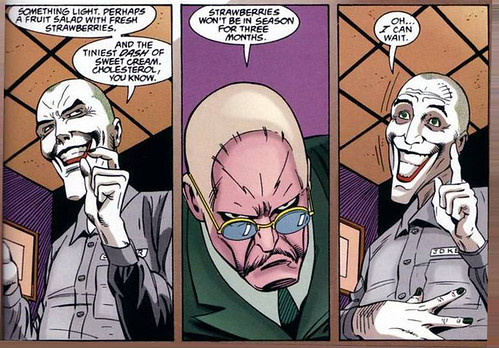 Why stop geeking out now when I’m on such a roll? I was catching up with some entries from a comic scans group on LiveJournal over my lunch break and the above scene from The Joker: The Devil’s Advocate story arc stood out to me. The Joker is on death row for killing over 2,000 people while the Batman is actually trying to prove that he didn’t do it. Even though he professed his innocence, once behind bars he starts to like all the attention he’s getting. In the panels above, he was just asked about his last meal. It’s a classic Joker moment by a writer that gets him.

Also good is a few pages later when the priest he requested is screaming for the guards to let him out of the Joker’s cell. The guards rush in, saying that he’d been in there for hours and assuming that the Joker must be doing something unspeakable to him. When they let him out, the guards ask “What’s he doing to you?” and the priest cries out, “Confessing!” as the Joker is relating the end of another grisly tale about how he killed someone. Talk about staring into the abyss.

Even though the upcoming Batman movie is doing away with the “comic book” trappings about the Joker’s origin, I’m looking forward to it. I’ve been hearing nothing but good things. Plus I can’t wait to see what other loose threads they’re going to dangle in front of us to leave the door open to introduce more of his rogues’ gallery in additional sequels.