Mm-hm, I went there 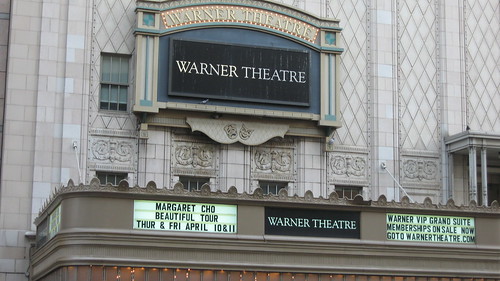 And it was hilarious! Circumstances let me snag an unused ticket from Michael to see Margaret Cho last night. He’d originally mentioned it to me when he bought them and honestly, I’m not all that big a Cho fan, however opening for her was The Liam Show, which I really wanted to see but still at the time it wasn’t fiscally responsible to pay around $50 for a ticket. But when time came around, it wasn’t so bad for me to do so and I took the opportunity.

Definitely well worth it, but I can’t honestly say that you wouldn’t get the same experience buying or renting the DVD. Nothing about that particular evening or circumstances made her jokes that much more funny and the Warner Theater chairs are not really designed to accommodate Margaret’s… shall we say… larger fans? It’s a good thing Michael and I are friends since the guy seated on my left didn’t leave me a lot of room to move around.

Margaret was all over the place, without even a warm-up she talked about getting a G-Shot. She touched on recent political scandals, talked a lot about sex… a lot, her mother, of course giving love to her gays and her fellow fag hags. A pretty good run was when she said she was more of a bear fag hag, commonly known as a Goldilocks, and how bears always get laid, “They’re out there swatting at cock like a grizzly bear swiping salmon out of a frosty mountain stream!”

I think “Beautiful” will come over very well on DVD because one thing that really sells her act are her facial expressions and the cameraperson for her mega-screen was good, but not always so great keeping up with her. She showed us her ink and her too-tight jeans, “You know when they’re so tight that you fart… and it comes out the front?”, compared Kegel exercises to a JRT urinating on a lawn and ended the show with her song “Eat Me Out,” a lovely ode to… well you can guess.

The next outing will hopefully be getting some people together to see The Forbidden Kingdom, that definitely looks worth paying for and seeing in the theater.