At least one Presidential race that we know is fixed 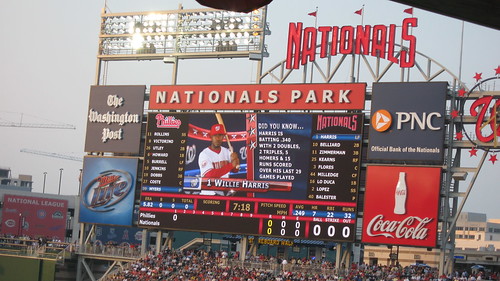 If you think the scoreboard is busy, you should sit through a game! It was a really fun time though. When I told some friends I was invited to a Nats game they all said, “What the hell do you know about baseball?” To which I countered, “Who cares, they have a suite!”

Before I start rambling on, it was really good to meet some of the TMG Strategies social media people and meet/see the bloggers behind:

Standing in the Will Call line, twice, makes me think that the park really needs to figure out a way to print validated pre-paid tickets at home. The line was 1/4 as long at the “purchase now” line about 40 mins before game time, and it was over 1/2 as long at 10 mins prior and they really weren’t moving people through quickly. Also a lot of people in the Will Call line thought it was the Purchase line and had to be sent back.

Once inside, the smell of the ballpark is unmistakable… no.. wait.. that’s not the ballpark, that’s… FOOD! And way more than the usual ballpark fare. Thankfully I’d had a small snack before leaving the house, so I wasn’t tempted, but after hearing so many complaints about the price of stuff at the park, I can understand why — the will to resist the goodies has got to be shot after getting a whiff. And that’s just the main (2nd) entry level, when you head up to the 3rd level with the deck seating and suites, it’s like a completely different world. Air-conditioning, bars (that oddly resemble airport bars/eateries), cocktail bars (I had to giggle when one of their signature cocktails was a Dirty Queen) and good sampling of concession stands, again with the intoxicating aroma that seems to say, “Game? What game? You look hungry!”

I’ve never been to any sort of blogger meet up except with close friends that all happen to have blogs, we call those happy hours and strangely enough blogs never come up. But meeting new people and other bloggers is a good thing, and with the exception of the earlier-mentioned ex, all of them were strangers to me, their blogs too which makes me think that maybe I need to get “out” more online. One of the TMG guys (I’m horrible with names, apologies in advance) mentioned he reads about 50-60 blogs a day. I know that it’s a part of his job, but damn. I’d definitely go into overload mode.

Speaking of overload, Nationals Park is nice, but the theme of excess pervades. I don’t mean the expense, though stuff is expensive, but the last baseball game I went to was at Camden Yards, a completely different experience. It’s like the designers/promoters didn’t want there to be a single moment of silence when the players weren’t doing their thing. At times, it was difficult to carry on a conversation with someone if they weren’t right next to me. And seriously, why “Charge!” It’s a baseball team, they’re not exactly rolling over their opponents like football or hockey. It was like someone said “baseball is boring, let’s jazz it up” and went a little too far. The game itself was good and had some exciting moments where even the less-inclined baseball fans among us were getting pretty animated. But alas, I wasn’t expecting a Nats win and they did not disappoint. The Presidents’ Race was cute, but Teddy can’t get a break as usual. He was actually in the lead for a long while and then got ambushed by the Nats’ mascot and taken out of the race.

I left about 9:30 (top of the 9th) so I could make a decent bedtime, and leaving before the end of the game didn’t have me running into a huge metro crush on the way home. It still took a bit longer than my usual morning commute, but it wasn’t rush hour so no biggie. I’d go see another game there with friends, especially if those friends had access to a suite. 😀 But assuming they still have relatively inexpensive seats, it wouldn’t be a bad way to spend an evening.