Hey… let’s be careful out there 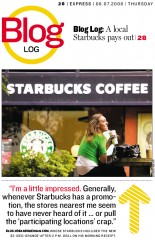 Wouldn’t you know this morning the woman in Starbucks didn’t offer me a receipt? Then another woman, after the first had just ripped mine off the top of the long printout of abandoned receipts, took it and was about to throw it away while they’re both staring at me like “What?!” She uncrumpled it and handed it over. It’s not that I plan to go back in the afternoon for a $2 iced grande drink, but you never know… I might!

On the train this morning, I had my first experience with a car specifically being called out. Normally the conductor will say, “This is an 8-car train, please use all cars, all doors people.” But today the announcement came, “People at the second car, please use other cars and other doors to get on.” And it was well-warranted because when our green line train rolled into L’Enfant, tons of people crammed onto the car. The reason for this is that when it gets to Navy Yard, that car/door is right at the stairs/escalator and people crowd the door like nobody’s business. So much so that they’ll barely let someone in at Waterfront station that comes first.

I also saw someone nearly get knocked out. Because every one was crowding in and some people weren’t holding onto the train poles and the train was kinda “jumpy” this morning, there were a few “whoa!” moments. During one of them, one woman’s lunch bag swung around and clocked another woman right across the chin. I only saw it happen out of the corner of my eye, but it didn’t look like it was pleasant and sounded like it was a solid soda can hit. The injured party tried to laugh it off, “Wow, what have you got in there, honey?” but she kept rubbing her chin until we got to our stop.