People DO know that we don’t have a cure yet, right? 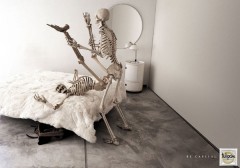 At each of our testing sites, we are seeing an increasing number of young gay men, particularly African American men, coming to us newly infected. These are young men who don’t remember the first wave of the HIV/AIDS epidemic and came of age when effective treatments were available. As a result, they have never seen HIV as a major problem.

I am still having such a hard time wrapping my brain around why people are not more careful and don’t see this as a huge issue.