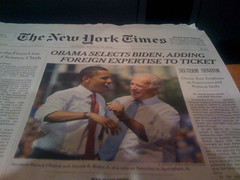 Moose made a very good point over brunch yesterday when I said I wasn’t having any coffee (even though I was quite hungover). I have caffeine 5 days a week, why deny myself some on the weekend? So even though I got a fine night’s sleep with no booze, I decided a walk over to Starbucks was in order. I almost wish I hadn’t gone. The espresso drink at the Columbia Heights Starbucks is vastly superior to the one that I normally get at the Navy Yard Starbucks. And the barista was much cuter, too.

Once I pushed past the pain yesterday, it was a good day. After brunch, Moose and I headed to Macy’s for a bit of shopping–he needed jeans and I just felt like shopping. After trying on a few pairs, I found some that fit and don’t look too bad for the er… attributes:

Jeans are like the UPS man. They should always give you a nice package.

Neither of us gave each other the “how’s my ass look?” test, but we were both happy with our purchases. After getting home, I was feeling pretty worn out, but I managed to venture out in search of food and then relaxed at home with movies and Britcoms. So far, I have managed to avoid making any “vacation lists” but I will need to put some together for chores (of which there will be few) and shopping lists. I’ve still no plans for the week, but it won’t involve being at the office and that’s good enough for me!