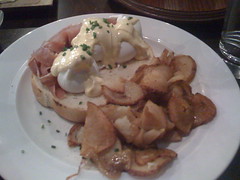 Move over Tonic, I may be a CommonWealth breakfast/brunch boy now. After going for the first time this past Thanksgiving, I knew I wanted to try more of their stuff. Kyle suggested we hit it for brunch and I was in.

It isn’t that I don’t like Tonic, but they’ve recently made a lot of changes in the upstairs dining room, attempting to go more upscale which doesn’t really fit the feel of Mount Pleasant Street. The room used to feel warm and casual, deep orange tones, vintage advertisements for tonics hanging on the walls. Now they’ve painted the walls black and when you walk past it kinda looks like a bachelor pad ready-made for a make-out artist. Additionally the menu’s changed, removing some old favorites while raising the prices. I admit that I haven’t been back for brunch since the redecorating, but the last time I was there it wasn’t good. Food sub-par, service slow and inattentive, tables seated after me getting served before me and my biggest pet peeve: being ignored to the point of feeling like you’re unable to leave because you can’t even get the server over to refill your coffee or water, let alone bring you the check.

I won’t say CommonWealth is perfect, but the staff is friendly and attentive, the food is delicious and for most American eaters, probably items or methods they haven’t encountered before. I had no idea what shirred eggs were, but a quick google lookup (thank you free wifi) told me that maybe they weren’t for me, but I did get the poached eggs on toast with country ham and Kyle had the house smoked tofu shepherd’s pie. I also got a popover with maple syrup just to round it out with a little sweetness. They’ve done a very good job at fitting a lot of seating into the space, but the tables do suffer from Tiny Table Syndrome combined with the fact that they provide each table with a lazy susan containing condiments, so you’re losing a lot of real estate before you’ve sat down. Like most places, they aren’t trained to remove used plates at the same time as bringing new ones, so there’s the juggling act when your food arrives whether you’re done with the previous bread/appetizer course or not. It didn’t appear that they offered any drink specials or bottomless mimosas, but the coffee was strong and delicious and our cups were always kept full.

I’m trying to be a bit better about my portions on the weekend mornings, but for a solo or small group brunch from time to time, CommonWealth has definitely moved to the top of the list. Plus it’s right off the Columbia Heights metro, so very easy to get to. Sorry Tonic, I mean we’re cool and all, but you’ve changed man… you’ve changed.