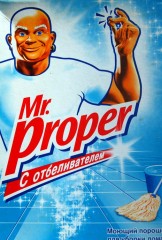 I suppose it’s a good thing that my apartment is barely recognizable. I’m seeing more floor space and more gleaming surfaces than I have in a long time. I make no excuses for it, but being busy and lazy tends to make one less concerned about tidying up. It’s funny to realize that my apartment, kitchen, closets, etc. really aren’t designed to have everything clean at one time, especially closets. Having nearly all of my laundry clean has severely exceeded my capacity to store it! But the place is much cleaner than before and that’s the important thing.

Friday I hosted a small Frak Party for the return of BSG and that was my primary motivation for cleaning my place. Kyle, James, Moose and Michael dropped by and a good time was had by all. You’re the fifth… What the Frak?! And even so, my place wasn’t as clean as I would have liked but it’s much better now and I’ll be trying to have more events at my place in the coming year.

Yesterday and today have been all about the cleaning, with a brief break to try and deal with RCN over a tech support issue. After spending over 2 hours on hold with a repeating message regarding outages–none of which were DC–I reach an outsourced representative who finally tells me there’s a reported outage with a 24 hour estimated fix. I really am not one to go all pro-USA about outsourced customer service, but it irks me when they are not well trained or educated to recognize the cultural difference. One of my biggest and dumbest pet peeves? Giving someone my first and last name and they call me Mr. Brian. Add to that the fact that they have nothing more than a script or canned responses and they won’t brook being interrupted while interrupting your every sentence. I realize that this isn’t necessarily common to all phone-response service reps, but it is a recurring theme. And after it was all said and done, it took a quick text from a friend that happens to work for RCN to tell me what was really going on, which was information that the tech support rep I spoke to did not have.

I don’t deny my Royal Geekness, take away my reliable cable and internet and I feel more than a little isolated. Plus I missed CNN’s coverage of Obama’s Whistle Stop tour, and that really irks me. However they did get it fixed in time for me to queue up the We Are One concert tonight. I won’t be around because I’m getting my Ball on! I am so looking forward to the Bloggerational Ball at Reef tonight. I could use some fun before the parents/family arrive tomorrow afternoon. And I could especially use some drinks before they arrive! 😈