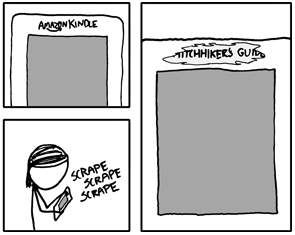 xkcd has really hit upon the reason I want a Kindle… read the full strip–they aren’t fooling anybody! The price of it still turns me off, but I’m keeping my eye on it. Of course the first thing I’d have to put on the device is The Guide*, but there are some other good offerings. The Cook’s Illustrated How-to-Cook Library is currently free!** I also think it might make me read the paper more often. Well, the virtual paper anyway. I guess if newspapers really do die, they won’t bother making an electronic edition that’s worried about matching old-school papers.

I’m also waiting to hear about Kindle 2 hacks, since I’d be happy to upload my own files to the device, but after a while 10¢ a pop would seem annoying. Not expensive, just annoying. I still want one tho. I’ve got their silly Amazon Chase Visa card, surely they can cut me a deal or a discount on one!

However my two primary holdouts remain: no color and I already have tons of books, can I at least catch a break on an electronic version of anything I’ve previously purchased through amazon? That’s fair, right?

* I saw the cutest guy on the metro that looked just like Arthur Phillip Dent as played by Simon Jones.*** It made me think of this article about a 6th Hitchhiker book that “Arthur” had some strong opinions about.

** Customers have created a kindle freebie tag, so it’d be easier to track what you can download at no cost. Whether it offsets the price of the device after enough time… I dunno.

*** Yes, I realize that Arthur Dent = attractive probably makes no sense to most, but I’m a queer geek and that’s just how I get down, ok?