In deference to my nerdy roots, I am rarely ever ashamed to say that I still love cartoons.* For the most part, I’ve given up on a lot of modern cartoons, especially since the ones that seem cool never last long.** And my biggest split with cartoons was when they attempted to market a Transformers franchise that was just another blend of Pokémon. Watching enough of them–and the ads run during them–it made me wonder if Madison Avenue really thinks kids are stupid and their parents will buy any stupid ol’ thing advertised during a kids’ show. 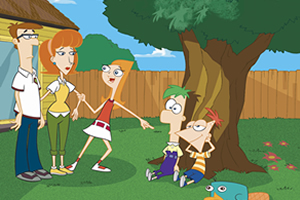 Even so, some do make the grade and right now I’m into Phineas and Ferb. As it comes on Disney XD, I really did wonder if I was reverting into immaturity, but then I watched the episode, “Dude, We’re Getting the Band Back Together.” The premise being the boys trying to get their parents’ favorite band to reunite for their anniversary–without their mother knowing. While their attempt to get the lead singer takes place in a music store very reminiscent of a scene from The Blues Brothers, asking the bass player to return is nothing less than fabulous***:

And then I realize… I’m watching a TV show that is extremely appropriate for me.**** Ferb’s facial expressions and rare breaks in his silence slay me.

Since my usual daily animated dose is of The Simpsons, it’s nice to have something else to watch when I get home. And who wouldn’t be interested in a pair of boy genius step-brothers who build fantastical gadgets while their older sister constantly tries to expose their plans to their mother? Oh, and their pet platypus is also a secret agent.

* Ok, maybe I won’t mention it on a first date, but once a guy sees the programs saved on my TiVo, the jig is up.

** Yes, I’m still bitter over the cancellation of Justice League/Unlimited, what of it?

**** I still may be reverting into immaturity, but not from watching this show.