dissent: ur doin it wrong

I wasn’t able to watch Obama’s speech on health care last night, but friends on twitter, Facebook and IM kept me up to speed. 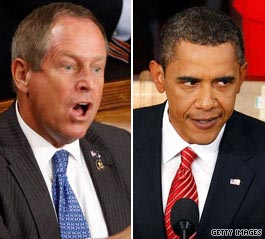 When I saw a flurry of messages asking, “Who just shouted out ‘You lie!’?” I was stunned. Apparently Representative Joe Wilson (R-SC)–even though he’d been provided with a copy of Obama’s speech ahead of time–could not hold in his outrage at the incorrect implication that undocumented immigrants might benefit from healthcare. I believe a few people have pointed out that the language states otherwise, but when has the truth ever mattered when it comes to political discourse?

I briefly thought that his party would praise him, but apparently everyone was calling him out for his disrespectful outburst. Even so, it made me think that there’s a time and a place to express your dissent, and I had to find an example of two who can only be called experts at it:

I know, it’s not video per se, but this is one of my favorites and I couldn’t find a proper video of it. YouTube just doesn’t care about quality anymore… 😉