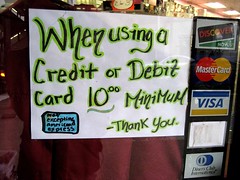 Let me start off by saying that any business attempting to force a minimum purchase to use a credit card–while not illegal–is often in violation of their agreement with credit card issuers. A merchant can attempt to offset some business expenses, like limiting condiment availability, but they can’t make you spend more just to offset their transaction fees for accepting credit cards. This isn’t about that specifically, but it does touch on it. It’s more about bar tabs and establishments that act in ways similar to penalizing customers for using cards vs. cash, more specifically two experiences from this past weekend.

My first experiences with the idea of a “tab” definitely started while watching Bewitched. The bar Darrin Stephens would often frequent with Larry Tate after work or after one of Samantha’s family shenanigans never seemed to ask him to pay, always putting the drinks on his tab. The character Norm Peterson on Cheers was afforded the same luxury–with a delicious NASA-aided calculation joke in the finale. Since my lush abilities wouldn’t activate until much later in life, I thought it was cool, kinda like a credit card that wasn’t a credit card. I first started running my own tab in DC, usually with favorite bartenders at clubs. The societal move from handling cash to cards was slowly happening and it was nice not to dash to the ATM before going out or pay the crippling fees at the ATMs in the bars. Always seemed simple enough, hand over the card, order drinks, sign out at the end of the night. Now I can’t remember the last time I didn’t hear “leave it open?” or “would you like to start a tab?” when going out.

My first experience with a minimum tab was 4 years ago Thursday at Lucky Strike in Chinatown. I was waiting on a friend with plans to bowl and maybe see a movie–none of which needed me to have cash–and the bartender informed me that they place a $50 hold on the card, so that they can return it to you and charge the correct amount when you sign out. That actually makes sense to me, as an authorization isn’t a charge. While it may discourage you from using your card, it isn’t forcing you to spend $50, just making you decide whether you might need that freed up credit for the next few days or not.

Fast forward to Saturday late afternoon. After a nerd field trip to National Geographic and popping in & out of some shops, Randy and I thought about having a drink or two and found ourselves at JR.’s. I’m not often at JR.’s unless specifically invited by friends, so after ordering some drinks and handing over my card, I thought nothing of it when the bartender offered to start a tab. After I agreed, I was then informed that they not only have a minimum credit card purchase/tab of $15 but that they also hold your credit card and drivers license, noting that there was an ATM upstairs.

I can only guess the latter is to discourage people from leaving the former behind or maybe a means to discourage drunk driving or who knows what. Since I didn’t know how long we planned on staying, I agreed, though it was clear that I thought it was very weird. As it turned out, we had a drink each and decided to move on someplace else. The bar wasn’t really “hopping” and the bartender wasn’t very friendly, so this can’t have been a surprise. When I went to close out the tab, he repeated the $15 minimum charge and said he’d have to charge that to my card. I gave him a “Hell no” look and said that I hadn’t spent $15 (2 drinks, $6 each). He repeated the policy–note, this is the third time he’s told me something that in all likelihood isn’t allowed–and I said I’d find the cash and be done with it, which I did.

Our next stop was DIK Bar, aka “Windows” for another few drinks. It was similarly dead, but we had a few drinks, paying with cash this time. Still, I noticed over the bar a sign advertising an $8 minimum for credit card purchases and next to that a sign saying that any credit card tab left open overnight would have a 20% gratuity added to it. I suppose that’s considered the lodging fee for the customers’ cards? Again, the minimum purchase requirement isn’t allowed, however the overnight card fee… I dunno. Customers might see it as a fair inconvenience fee for not having the bar call their card company to report a lost card. 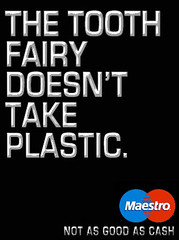 A quick look around the web shows this has been noticed in Chicago and Baltimore, but I imagine people see it as just “one of those things” that isn’t worth bothering about. As someone that primarily uses cards and is now in a travel path that doesn’t go past my banks’ ATMs, it annoys the hell out of me. Especially since these bars hardly fall into the category of “small business”. I might expect it from the Chinese takeaway spot behind my old place that doesn’t have a steady stream of customers, but from a bar that often gets so crowded you can’t move? I don’t think so.

Still, by all accounts these are normal practices. I mean, they have been for years, but a number of places have been taking down the minimum purchase signs and accepting the transaction fees as part of their business reality. They are learning that this is how to establish business credit, at least initially anyway. If ever there was a problem, I could certainly call Visa or MasterCard every time I encountered this type of thing, and when I worked for a credit card bank, I processed many similar complaints on behalf of customers. But instead, I think I’ll stick to the bars and bartenders that treat me well and don’t see my choice of payment as a hassle. Roll with the times, guys. Cash is no longer king.