It’s funny how things come full circle. Just over a year ago, I was starting to discover and connect with the DC foodie scene. My cooking posts were tossed in with the other things I wrote about in DC and if you’d mentioned a “food blog” to me, I would have laughed in your face. And well… here we are!

When I got my first crock pot, my inbox and IM windows were flooded with recipes to try and one that worked out well for me was a pulled meat style barbecue. It was ridiculously simple, put meat in the crock pot with a bottle of your chosen barbecue sauce and set on Low for six hours, shredding it at the seventh hour and simmering in the developed sauce. I shared the technique with a friend and ended up getting a mention as a “foodie friend” in her post on Pulled Pork. After looking back at that recipe, I decided to give it a try with a pork shoulder I recently picked up at the supermarket. Instead of a wet sauce, it uses a dry rub and relies on a bit of water and the pork’s fat to develop a sauce as it slowly cooks.

The dry-rub recipe is a “classic” from Cook’s Illustrated and the method is pure crock-pot with just a little bit of fiddling. You normally can leave things in the crock pot and walk away, but this requires some turning early on and obviously some shredding in the later hours: 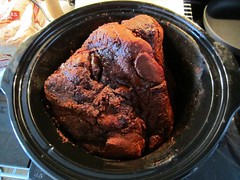 On cooking day, remove the pork shoulder from the bag and place it in the crock pot. Discard any leftover spice that didn’t “cling” to the meat. 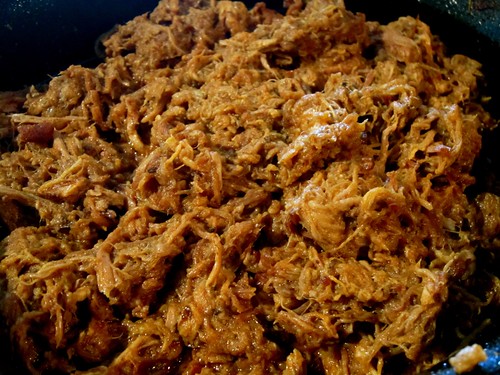 If your pork shoulder is closer to 8 pounds, you may need a longer cooking time and vice versa for smaller cuts of meat. Because of the fattiness of pork, it’s hard to mess this one up. Please note, this recipe makes a lot. It would be great made in advance of a picnic or party, but if you’re making this for just yourself, plan on a lot of leftovers!

To appease the BBQ purists out there, I admit that this isn’t barbecue. It was slow cooked using a steamed/simmering method, not slow-roasted over low heat on a grill/smoker. Some people like the charred bits that barbecue brings and if you feel that’s missing from this recipe, I advise that you remove the pork shoulder at about hour 5 or 6, place it on a baking or roasting pan and set it under the broiler for a few minutes per side to crisp up the edges before returning it to the crock pot for shredding. Just be careful moving the pork shoulder around at this stage as it’s quite ready to fall apart.

Even if it isn’t traditional barbecue, it will do for me in a pinch. Especially if I see that a planned cookout might be rained out, this wouldn’t be bad to have in the fridge as a backup dish. And while a sandwich is certainly the most satisfying serving method for the pork, I could also see it going over couscous or steamed rice, rolled up in a wrap with chopped veggies or even tossed with some cheese into an omelette for brunch. As I said, you’re going to have a lot of it, so if you and your guests aren’t feeling piggy–pun intended–when it’s first served up, plan ahead to freeze some or make some unique dishes with the leftovers. Enjoy!