*taps mic* Is this thing on? Anyone still out there? Yeah, it’s been a while, but between indulging in birthday shenanigans, and sorta realizing that I’m not as able to recover from birthday shenanigans as I once was, I needed a bit of a break. Don’t worry though, you’ll be hearing about this and that, especially as I suppose I have to admit that with September coming to a close, I’m slowly exiting birthday time.

Still, today is Friday and while I am so ready for the start of the weekend, I have to get through that one last workday before the paltry 2-day break. Thankfully, I am prepared to do battle with The Last Weekday… with a fashionable–a just a touch dandy–ensemble as my armor, man bag my shield and attitude my sword, I was ready for the commute. Or at least I thought I was, because sometimes once you leave your house and hit the street, no matter of preparation can keep you from feeling a little tired and shlumpy.

As I hit the first metro escalator, I slipped on my earphones, pressed play and it was at that moment that I realized what vital part of preparation I’d been missing: my war drums. I try to always pick music in the morning to get me going, but thanks to the Imma Diva Janet Jackson-themed podcast I was able to reach back and invoke the spirit of my 20s with Throb.

If ever there was an appropriate time to use the term aural sex, it was with her album janet. but most especially the song Throb which pretty much sounded like a recording of sex with her singing a few hooks over it–likely inspired by the interlude in Lil Louis’ French Kiss. Though I admit to having “funny feelings” while listening to both, at least with Throb I was dancing up a storm in the club and knew full well what to do with those feelings. 😉 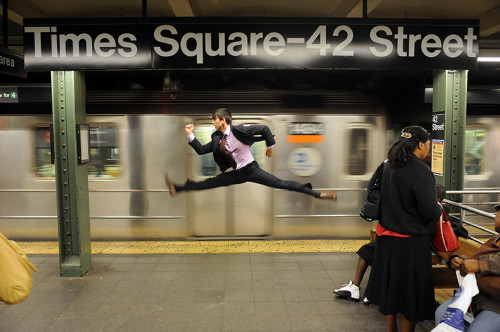 So now–in my head–the scene changes. The dimly-lit metro platform becomes a runway, I instantly feel about ten times more vibrant and one-hundred times more fierce and am not ashamed to admit I worked a little Naomi Campbell walk down to the end to await the train. Sometimes the right armaments is all it takes, even when it’s really just you, your music and adopting the proper attitude for the day ahead.

TGIF, everyone! Let’s hope the end of September heralds some actual Fall weather. I’m ready for sweaters, breezes… and the changeover from Sangria to Spiked Mulled Cider.

Image from “Dancers Among Us” by Jordan Matter