health: such a little thing…

I completely misjudged how long it would take me to get into work this morning, so here I sit at quarter to 7 in a nearly completely empty office. Which is actually a really nice thing. People always ask why I get in so early and my usual “acceptable” answer is that I get to go home early, but it’s really that I have between 2-3 hours where no one else is in the office and I can really get stuff done. So naturally, I clicked “Add New”1 and decided to write instead. 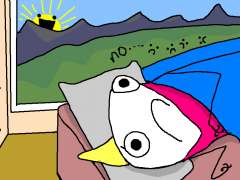 Last month there was a post at the blog Hyperbole and a Half titled “Adventures in Depression” and to say it hit the nail on the head for a lot of people–myself included–would be a big understatement.

Some people have a legitimate reason to feel depressed, but not me. I just woke up one day feeling sad and helpless for absolutely no reason. … It’s disappointing to feel sad for no reason.

Yeah, that. I know I’ve been stretched too thin lately, unable to relax, stressed out about work, concerned about friends, apprehensive for the holidays and in general, just sad. So I suppose mine has a reason, but when your mind can’t really accept that any of those things is enough to be really sad about, it folds back in on itself and just gets larger. Even so, I feel like I have levels of functioning. I can be sad and still be ok because in general every day brings a lot of ups and downs and generally the ups are winning, so my sadness is still a functioning sadness because it’s alleviated, in part anyway. But that’s also a trap because I don’t acknowledge it like I should, I get caught up in the side effects, “it’s a migraine” or “I’m just really tired” or “it’s time for a cocktail!”

So I’m going along, minding my own business and all it takes is one little thing to completely derail me, on a bridge, over an orphanage, while transporting explosives… and a lethal virus… or something.2 That little thing can be just about anything, especially something that in a better frame of mind you’d be better able to focus on and fix or ignore but when you’re right on the fine line between sadness and depression just knocks you for a loop…

The other night, my computer crashed.

I know, right? Should be a minor setback since we have multiple computers in the house and honestly none of my data should be lost, it’s likely a problem with the PC’s workings. But to be right in the middle of a game3 and have the PC just stop responding would have elicited a cry of “NOOOOOOOOO!” had it not been 9:30 in the evening with a sleeping spouse in the next room. Even worse, to attempt a reboot of the machine and be unable to get Windows to respond and eventually the machine at all to respond was just the nudge over the edge I wasn’t looking for.

At the time, I just gave a movie-worthy shrug4, fired up Skyrim on the XBox and assured myself that it would all be fine by morning. And then in reality tried to get the machine to respond a few hours later to no avail. So my music, movies, saved TV shows, all inaccessible until I fix or replace the machine. And as we’re right on the cusp of holiday shopping, I feel trapped and unable to just buy a new machine because I may not get the best price. 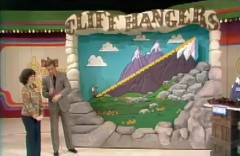 Side note: When did stores become ok with being like ebay? The point of retail vs. auction is that you can go get what you need right now and feel somewhat assured that the store is giving you a fair, if not the best, (market) price. But nowadays most retail, including big box stores, dangle items in front of you that you could buy right now, or maybe if you wait until the weekend or the next holiday they might be much cheaper. And you don’t want to buy the same product for more money like some kind of dope, right? It’s like the Cliff Hangers game on The Price is Right. Don’t buy too soon or wait too long, you’ll miss out! The worst part of all this being that we buy into it–pun intended–and fall for it time and time again.

Anyway, the good part of acknowledging it is that I know what I’m dealing with and can take steps to alleviate it, possibly even move past it. I don’t need to do anything drastic like listening to Adele, but I can better identify how I can take care of myself so I don’t sink further or drag down/alienate my friends and loved ones along the way.

2 I think I lost control of my metaphor.

4 The overly-dramatic move you make as if you were in a movie and the sheer act of giving up means your problem will miraculously be solved, or you’ll find your keys or whatever.