Size matters not. Look at my cheesecake. Judge it by its size, do you? Hmm?

It is no secret that I love cheesecake. I suspect this love started when I was young and neighborhood bistros ruled the planet. When I started my double-digit birthdays, my parents would often have something planned on that night, a movie, a show, or even some event of their that I just might enjoy–or not–tagging along. On the way home, it sort of became a ritual for a few years that we’d stop off at Bennigan’s for dinner. Once inside, my father would disappear for a minute and return to the table and at the end of the meal, servers would appear with a slice of cheesecake with a candle in it, clapping and singing, and it was always awesome.1

I still like traditional cake, but when I started cooking and baking and realized that I could make a cheesecake any time I wanted to… game-changer. I’m a fan of the New York style thicker creamy cheesecake, but I’m always on the lookout for new recipes, especially since cheesecake is usually really easy to make, and really impressive to bring to a potluck or party. This year, I’ve already made three, but they were huge, and my love for cheesecake was at war with my appetite. Even giving out slices to others and bringing leftovers to work still left me with a quarter to a half of an uneaten 9-inch round cheesecake in the fridge.2

When I last made a sweet potato cheesecake over the holidays, I somehow had too much batter and ended up making a mini cheesecake in one of my smaller pans with the remains. It turned out just as well, however the idea to make them never really occurred to me because 1: I’m an idiot, and 2: I didn’t put enough thought in figuring out the proportion reductions to go from a 9- or 10-inch pan to a 5-inch one. So… to the internet! 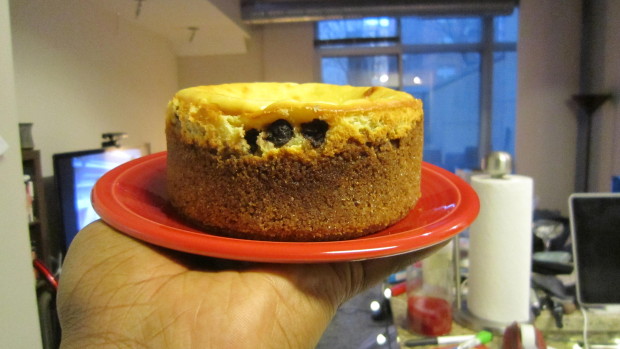 I found a recipe for a mini chocolate chip cheesecake, and it now has me compiling ideas here and there to reduce my other usual recipes down to a more manageable size. See, I do like sweets, but I’m more of a salty/savory person, so I’ll make desserts, but if they aren’t intended to be shared they just sit around until I throw them out. Finally I have a cheesecake that I can get through, a treat-sized piece at a time and I don’t feel like I’ve wasted a bunch of ingredients just in case I do get tired of it.

The main thing was realizing that the base amount of cream cheese for this size springform pan is 12 ounces, or 1 ½ blocks. Most other items reduce down at the same rate.

There are a lot of tried and true methods for cheesecakes, but because of the smaller size in this recipe, I found that I didn’t need to use my mixer for the batter, instead using a wooden spoon, then a whisk. I also didn’t use a water bath, but I should have at least wrapped the bottom of the springform in foil as sometimes butter will leak through while baking.

If you don’t have a small springform pan… you’re probably not looking for this recipe anyway! However, here are directions for a DIY pan made from parchment paper if you’re still so inclined.

All in all, this worked out pretty well for me and allows me to stay on track for my “Year of Cheesecakes” trying different recipes every month but not having a ton of sweets around to tempt me. Look for more cheesecake in the coming months, and I’ll do my best to post the original and shrunk down recipes.

1 Hey, I was in my tweens, restaurant staff singing a non-standard “Happy Birthday” song to me was pretty huge back then.
2 And it’s rare that I get tired of a 9-inch anything…