Part of the holiday weekend found me in Old Town Alexandria and this historic marker for the Alexandria Library Sit-In caught my eye. 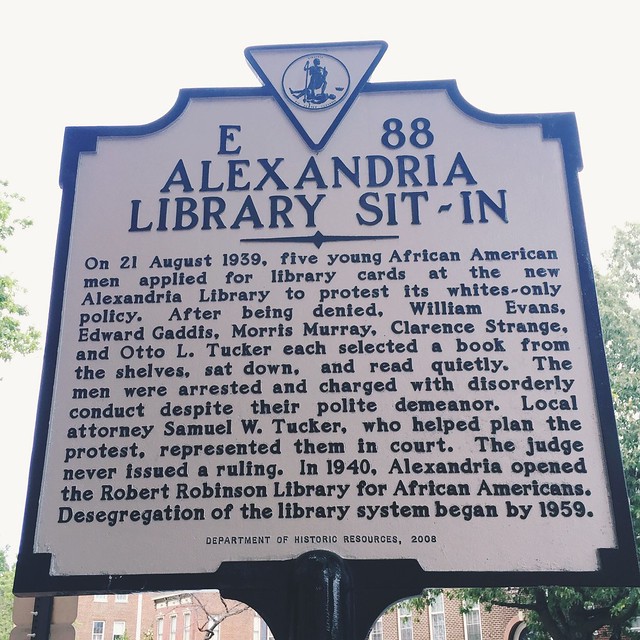 On 21 August 1939, five young African American men applied for library cards at the new Alexandria Library to protest its whites-only policy. After being denied, William Evans, Edward Gaddis, Morris Murray, Clarence Strange, and Otto L. Tucker each selected a book from the shelves, sat down, and read quietly. The men were arrested and charged with disorderly conduct despite their polite demeanor. Local attorney Samuel W. Tucker, who helped plan the protest, represented them in court. The judge never issued a ruling. In 1940, Alexandria opened the Robert Robinson Library for African Americans. Desegregation of the library system began by 1959.

This may come as a shock, but as a kid, I spent a ridiculous time in the library. Both the primary/secondary school ones and the local public libraries. Summer reading programs, movies, just a place my mom could leave me (mostly) unsupervised and she knew I wouldn’t cry “bored!”.

I only just got my library card and @dcpl is telling me about brunch. HOW DO THEY KNOW ME?! https://t.co/e4L9lvhsQw pic.twitter.com/OKSkwBqIOS

After college, growing up, being an adult, etc. and becoming able to create a hoard of my own books, the library was visited less and less. But I’ve recently corrected that by getting a library card. Did you know the library has e-books?! Well I do, now. I’ve been making the best of that to catch up on titles I’ve missed because it wasn’t in the budget at the time.

Many elements of America’s racist past aren’t hard to fathom, but the idea that a library — a center of knowledge — would be segregated? That’s a tough one, honestly.

Featured image via WaPo. “The five black men who staged a anti-segregation sit-in at the then-Alexandria Library are led out by police on Aug. 21, 1939.” (Courtesy of Alexandria Black History Museum collection)