Things I learned from express 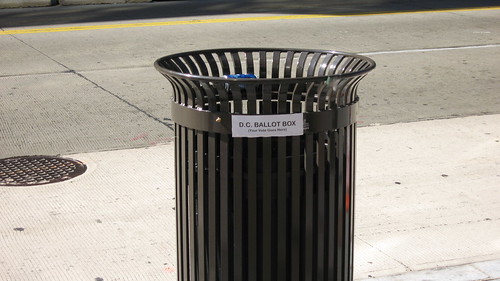 Everything else was news that I managed to catch up with over the weekend, or articles that have already been out on the wire for a long while now. I fear that actually reading express (for more than the cartoons and puzzles) is going to make me the kind of news reader that actually enjoys USA Today!

I’m fairly excited that thanks to my friends, I’ve reached 90% of my current goal for AIDS Walk Washington 2007. So far I’ve only posted something about it in each place just the once, but I did expand to facebook, myspace and friendster as well. I do find it odd that so few Whitman-Walker Clinic employees have signed up to walk with the team. Actually, every WWC event I’ve gone to with Justin has been really poorly attended by the WWC people. Even after accounting for the medical staff which I’m sure is dead on their feet by the end of the day, there’s a lot of other staff that could at least make an appearance. It just looks strange. Of course with the AIDS Walk, I’m sure there will be a lot of volunteers and people working on the actual event, but like the DC Pride parade, it’s strange when Whitman-Walker is likely going to be the group leading off the walk, and there’s barely 50 people there.

Still, thank you to those that have made a donation, and thank you in advance to those that haven’t yet but plan to. I still have to make my reciprocal donations to friends that I know are registered, and I also need to get back into info-junkie mode to find out what other DC groups and causes I need to give a little time to.