Why do you want to take pictures of the metro, anyway?

Ah the morning after a night of drinking where you know you’ve narrowly avoided a hangover, but your mouth still feels like sandpaper. Thankfully I had my clothes laid out already, so getting out of the house was no trouble. I brought my camera along because there are some amusing things in and around my office that I want to get shots of.

I was pretty much on time to the metro, I did stop to take some pictures, but no long delays until I got to the metro station. Everyday I will see people toss their free daily papers on the ground, in cars, very rarely into the recycle bin more often into the trash. So today I took a picture of the trash and recycle bins, that happen to be right next to each other. More papers were visible in the top of the can. Silly me, I think that it’s amusing that the recycle bin is right next to the trash bin and still people can’t be bothered to take a few seconds to fold their paper and put it in. 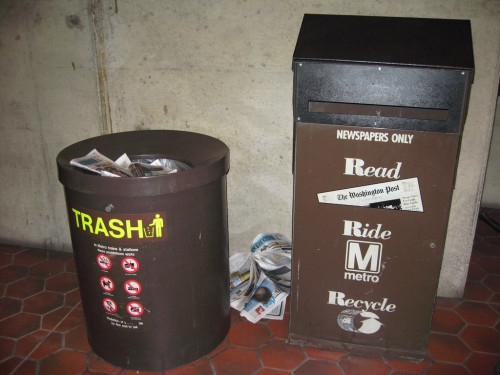 After I went through the farecard gate, I was stopped by a short woman in Metro clothes, she mouthed something at me, and after I took my headphones out she repeated herself, “You can’t take pictures in metro stations.” Now, having seen no signs to this effect, I asked her since when and if that was posted anywhere. Clearly asking a valid question was her trigger. She got a little defensive and a lot more rude and said, “It’s been that way since 9/11!” I said ok, I had no idea, but where was that posted, in the station, on the website, where? “Why do you want to take pictures of the metro, anyway?” was the response. I glanced at how long I had until the next train and decided I could continue this genial discourse for a little while. I said that people take pictures in the metro every day, it’s one of the more photographed transit systems. She said, “Well if you were taking a picture of a person in the station, that’d be fine, but you can’t take a picture of the station itself.” Ignoring the fact that her statement made no sense, I pressed her again on where I could find that information — I work for the government, I go to movie screenings, I live in DC, I’m well aware of where you can and can’t take a camera or a cameraphone and they are always very clear about posting it — and she had no answer for me. As she’d started to make eye contact with the other employee on duty, I decided that I wasn’t really in the mood to get hauled away to Metro Jail for violating a potentially non-existent rule. I thanked her for her time, told her to have a pleasant day and caught the next train. I considered asking her if I could take her picture, but thought that would be pushing it.

I just sent off a note to Metro asking them about this rule and we’ll see if I get any response back. In the meantime, I think I’ll just flip through flickr and look at the illegal photos.