Apparently Miss Cleo moonlights as a photographer for Life magazine! 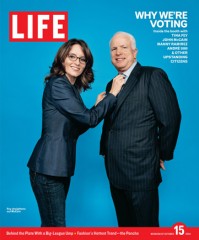 When we shot this photo for the third cover of LIFE (the newspaper
supplement version) back in September of 2004, we never dreamed we’d actually see it play out… or even anything this close.

As the election neared and it was becoming clear that every vote would
matter, we decided to ask a wide range of famous Americans why there were stepping up to the ballot box.

Eventually the Fey/Palin joke will wear itself out, but not today!