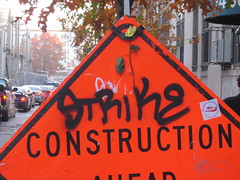 Because I’m tired and haven’t had my coffee yet, I’ll just regurgitate what I’ve read so far.

I had absolutely no idea that the PS3 goes on sale this Friday. I say sale because it seems that the price can hardly be called a sale, and the supply isn’t going to come anywhere close to the demand. But that’s ok considering the price point:

Michael Pachter, analyst at Wedbush Morgan, predicts fewer consoles will be sold this coming year than the first year of the last console race. “There aren’t enough hard-core gamers with unlimited funds to support that kind of sell-through,” he said.

“One thing that this proves is that the United States Senate, like the American public, likes a comeback story,” said Senator Lamar Alexander, the Tennessee Republican whom Mr. Lott defeated by a single vote.

Yes Senator Alexander, or it could prove that like some of the American public, they have short memories, are easily duped and are just plain stupid.

And the “Why is this even/still news?” award goes to: Toys for Tots rejects Jesus dolls. For all the outrage I’m sure some people will have, couldn’t a company named Beverly Hills Teddy Bear Co. think of a more appropriate gift to donate en masse than dolls that recite Bible Scripture?