I’m not much for holiday cooking and baking. I rarely host for any of the big holidays, and about the only thing I’ll bring to potlucks are non-holiday specific desserts. When a friend was throwing down for Thanksgiving and told us that we didn’t need to bring anything, I figured I could at least provide some libations. While wine is a default gift, I also sent ahead spices and ingredients to make mulled cider in the slow cooker. It’s a really simple recipe, but impressive mostly because of the seasonal charm and the fact that it will make your kitchen/apartment smell amazing while it simmers away. 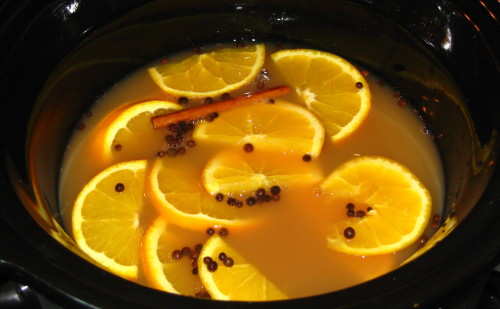 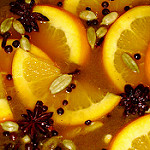 Hot apple cider on its own is already a treat in colder temps, but adding a few spices and letting them simmer for a while really turns up the volume and gives it a true seasonal taste. 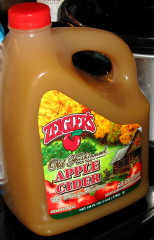 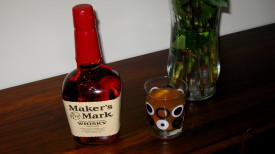 A slow cooker isn’t required, as this could easily be done on the stove top. But a crock-pot is much more “set it and forget it” while you cook other items, clean house, just sit around and let it double as potpourri while it cooks, what have you. And it was quite apparent as we approached the door that the smell had started wafting out from their apartment and into the hallway–very festive and welcoming!

One thing we discovered as the evening progressed was that whiskey makes the perfect companion for this cider… dangerously so! It blends so well into the mix that you can’t taste the liquor at all save for a slight kick. This was about 2 ounces of whiskey to 8 ounces of cider, Maker’s Mark being the chosen tipple of the night. Unlike the glamour shot above, I’d suggest a mug or other thick-walled glass for serving it hot.

Leftover cider keeps pretty well in the fridge and it works OK as an iced beverage, but I definitely prefer the spiced version heated up. The spices can be found in grocery and gourmet stores year-round, but you can probably find them in bundles or on sale during the holiday cooking season since they’re seasonal classics. Store-bought mulling spice mixes will work just as well, as will ground spices–with an extra step to filter before serving.

Some friends speculated that they might be able to use Celestial Seasonings Bengal Spice herbal tea bags in a pinch. Should they prove successful, I’ll report back.

If you’re not really much of a cook, this would make a great non-alcoholic alternative to bring to a party. You could even make it a day or two ahead, funnel it back into the cider bottle, and bring it to be heated at the host’s place. I’m sure you could find some air-fresheners or holiday candles that will give your place the same seasonal feeling, but I prefer this method!