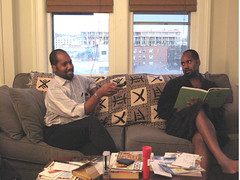 Lance Bass and his boyfriend, Reichen Lehmkuhl, have called it quits according to People magazine. I’m a little confused though, aren’t they supposed to be an A-List couple or at least one or the other actively working for us to care that they broke up? I wonder if Reichen will still hold claim to the phrase he really wants to become popular “Lanced” now that he’s no longer with Lance? He could find himself another ‘where are they now?’ boyfriend, see that they get outed and coin a new phrase. Cruised? She’banged? Spaced Out? – he should have broken up and swapped boyfriends sooner, he might have gotten in there with Knighted or Doogie’d.

In other news, still stressed out. Telling someone you’re stressed out is like when people say “I’m broke.” They usually don’t mean that they haven’t a penny to their name and they’re starting to look up pawn shops, it’s all relative. Right now I’m not “find a clock tower” stressed, but it is to the point where I know it’s not good for me. The problem is, taking time off isn’t an option right now. There are some parties coming up this weekend (which I think some I have completely failed to RSVP for, d’oh) so hopefully that will be something to look forward to.. so long as there’s booze.