Keep your fork, the best is yet to come

This weekend Saturday and Sunday swapped places, the lazy Sat and active Sun. I was still recovering on Friday from Richard and Dwight’s birthday party which was too much fun, hence the recovery. Between chicken and ribs and the on-the-fly cosmos, I managed to slink outta there sharing a cab with Richard sometime around midnight or one or something and promptly proceeded to head upstairs and pass out. 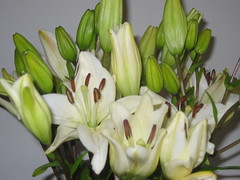 So Sat morning I was in that odd state where you’ve spent the last evening drinking and you know you need something greasy to feel better and I was too lazy to cook anything myself so I grabbed a book and walked out for a much needed brunch omelette. Afterwards I hit the farmers market and picked up some tomatoes and cilantro then grabbed a red onion and some flowers on the way home, because it was SALSA TIME! Both music and the condiment, nothing quite like fast paced instrumental latin music to totally throw you off your knife slicing rhythm and almost take your fingers off. (Thanks for that new knife Jenifer, I’ll see you in hell when I finally cut my hand off… love you!)

The rest of the day was happily spent snacking and watching tv and playing a little City of Villains until later that evening when it was Dr. Who time (between bouts of catching up on Yu-Gi-Oh!, don’t laugh) and Who-laden IMs with Brian in TX. “Age of Steel” was a good Part 2 with some very predictable bits to it, but I liked it overall and will probably watch it again as the one I got was a little messed up with jumpy audio, but when you got the itch, you’ll take a crappy product if it gets you the plot. 🙂

This morning I met Jenifer for brunch and we were both amazed by how good the Banana French Toast at Tonic was before heading out to the wilds of the suburbs to go bowling. Naturally because it was lighthearted fun we both did pretty well and had some high scores and we ended up bowling next to a meetup group. It looked like a good set of people, though it sort of spanned the geek spectrum a bit. I’ll have to see what groups are getting together in DC and maybe join them for something.

After a nice post-bowling nap, I met up with Richard for dinner. We headed into that area somewhere between Dupont and Adams Morgan to Mt. Everest and I had Butter Chicken for the first time ever, it was freaking amazing! It was just nice to sit down and have a good chat with someone. I sometimes feel like LJ/blogs are nice for kinda catching up with people after the fact, but it’s becoming too much a stand in for actual contact and communication. Part of that is evident by the guilt some people feel for un-friending people, and the anger some people feel when they’re un-friended. Still, it’s much much nicer to see people in person and find out what’s happening with them. (This is why I’m always suggesting happy hours and inviting many many people, you not-always showing up bastards… love you!)

The walk home after dinner was great, we stopped into a new wine store de vinos and we peered at the Linda Cropp meet and greet in the side yard of my apartment building. It looked like the crowd was enjoying it and I heard plenty of applause moments through my windows. I’m not very political but from the little bit I’m picking up here and there, I’m pretty ok with not supporting her.

The week ahead looks a little busy but fun and then come Friday is Senior Skip Day and X3!