Who put that city outside my window!? 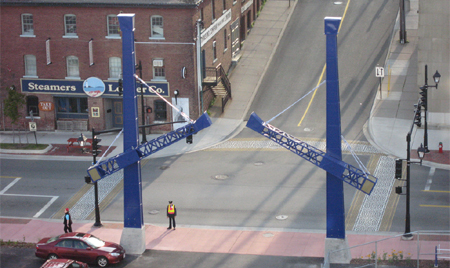 The oddest thing about a complete day at sea is how easily you get used to seeing nothing but water, all around you. Tuesday was a pretty grey day, weather wise, and there was a lot of fog from a weather system that had just moved through, so when you looked off the deck, you didn’t see a lot of anything. It was like being a ghost ship, no other ships or land for miles.

So I did what any person would do under the circumstances… I gambled! The casinos open right at the proper legal distance from our ports, and they wasted no time letting people know this. Unlike my time in Vegas, many of the table dealers were very cute Romanian men (boys?) and I knew that I’d be horribly distracted, so I stuck to slots. I lost a little, won a little, came out about even for the first day, but it was definitely fun. They had a Texas Hold ’em table, but it was all computerized, no actual cards and it didn’t seem like much fun to me.

Our cruise director Malcolm, who Michael had a crush on, kept coming over the PA system and letting us know all of the stuff going on, casino events, bingo, art auction, etc. They really didn’t let you sit too idle unless you wanted to. Malcolm had a signature sign-off, “Woo hoo!” and a quick search around the net shows that everyone remembers it, even though some were totally annoyed by it. But it was kinda cute when he’d finish an announcement with a “Woo hoo!” and you’d hear other people all over the ship go “Woo hoo!” in response.

After a while you realize that there aren’t really that many areas of the ship, you can traverse the leisure spots pretty quickly, dining rooms, bars, coffee shop, arcade, casino, shops, and … more bars. Still there’s enough that you don’t really get bored. The weather cleared up enough that Michael and I took our books up on the aft deck and laid out to read. At least we tried to read, it felt so nice up there that we both passed out pretty quickly, so I switched my iPod to an audiobook and enjoyed a nice nap.

It was formal night in the dining room, and we were not feelin’ it, so we passed and enjoyed a meal at the buffet. We did stop in to say hi to our table-mates and were a little surprised when the dining room staff assumed we were there to eat. I looked around and saw that while some people really go formal, others were much more relaxed about it. I mean I was in a nice shirt and jeans, and looked more “formal” than some of the other adults, so I’ll know next time that I could wear a suit/tux if I liked, but throwing together a nice casual dress outfit would suffice. It would have been nice to enjoy some lobster, but after Stoney’s, I’m a little spoiled for seafood, even if we were actuallyat sea.

As I said, it was very easy to get used to being at sea, so it was a pretty big shock waking up the next morning to some clear sunshine streaming in past the curtains. Michael was up before me with a little grin on his face and said, “Look out the window, Diva!” (his nickname for me, he’s Contessa) And I was all, “Why… what’s the big deal?” He prompted me to look again and then I got my second shock, there was all this stuff outside! We’d pulled into Saint John, New Brunswick and the sight of a city and cars and buildings and people was a little weird after having nothing but fog and water the past day and a half.

We’d ordered a room service breakfast since our excursion was an all-day one and there really wasn’t time for a sit-down breakfast. Unfortunately that room service never arrived. We found the catering steward and he apologized, but said that they’d gotten behind on their orders. We dashed past the buffet and grabbed a quick meal, I stuffed some bananas into my bag for snacks and we hit the gangway for our day in Saint John.