I get it now 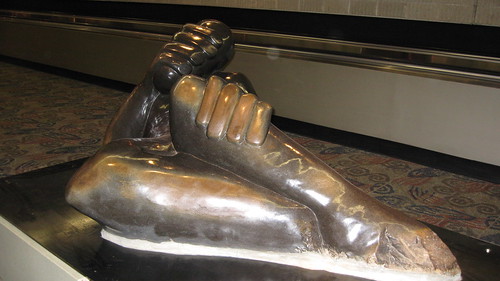 I think I finally understand the concept of “me time”. I could really use some of that right now. I feel worn down, run ragged, what have you. I’m stressed, tired, sick, stiff & achy, zoned out, and really wishing the world would just stop for a while and let me off.

I don’t really mind being the nice guy, but sometimes it really drags you down. I was happy to help a friend take care of stuff while he was in the hospital, I had no problem heading down south to see my brother, but time spent doing for others takes away from time for me and it does add up. My apartment has been totally untouched for the past week or two because all I seem to have time for is to go home, eat (poorly) and sleep before getting up for work the next day. And I actually had a chore schedule set to do some de-cluttering this past week.

It also means that I am feeling terrible guilt when I have to cancel on things because I really need to take care of myself. Some people are more than understanding of this and I have no problem telling them the truth when I’ll be unable to do something. With others, it’s just easier to come up with half-full truths (not lies or half-truths, just not the whole truth) because maybe the straight dope will be really hard to swallow. Some people cannot see that there is sometimes a very complex (and sometimes not so much) middle ground between “it’s all about me” and “it’s all about you”. Promise me you will take a moment to think about my perspective before you react, because you better believe that I have already done the same. Hopefully that’s advice that doesn’t really need to be said, but… maybe not.

I’m just tired, I need a nice couple of rest days or a vacation and I really can’t even afford to take them.

On an unrelated note, given the number of electronic messages and postings I’m seeing floating around that can’t believe the latest antics of nearly anyone spotted in an entertainment headline or similar — there’s a simple phrase that might help some people out: ignore it. Seriously, there are far more important things that deserve your attention and awareness, so stop getting distracted and annoyed by who’s doing whom, entering/leaving rehab, spotted by paparazzi, trying to raise hits on YouTube, etc. and who’s talking about it ad infinitum — just ignore it.