Perhaps everyone could just use a little laugh, I know I could. The holidays tend to be a stressful enough time and some of us go through what seem like consistent periods of stress, I know I do. This joke recently posted to one of my listservs gave me a chuckle, it may be an old one, but it was still pretty funny to me: 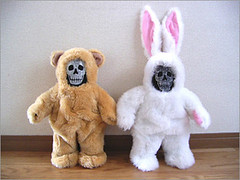 The first thing he saw was a bear chasing a rabbit and so he called out to them and asked them to stop. Then he said to them: “I am a magical frog and since you are the first two animals I have ever seen, I am going to grant you both three wishes. You will each take turns using them and you have to use them now.”

The bear (being greedy) went first. I would like for every bear in this forest to be female except for me.” A magical sound and it was done. Then the rabbit. “I would like a helmet.” This confused both the frog and the bear, but after a magical sound there was a helmet.

The bear took his last wish. “I would like for all the bears in the world to be female except for me.” A magical sound and it was done. The rabbit then put on his helmet, started up the motorcycle, and said “I wish the bear was gay” and took off like a bat out of hell.

I IM’d a friend yesterday that sometimes it seems like there’s just no easy way through life. I guess if life were that easy, we probably wouldn’t appreciate it as much and instead take it for granite, as I used to say when I was 6. We get our ups and downs and we muddle through, I guess in the spirit of the recent holiday we must be thankful for the good things and the good people in our lives. I may get upset and moody and turn into an outright bastard at times, but I get over it, and while I may not show it everyday, I am really glad to have people like you in my world. Y’all know who you are.