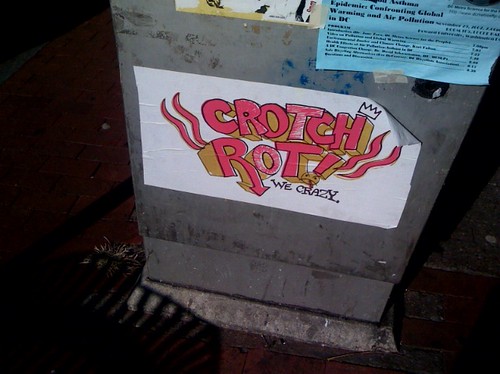 I have no idea what this is an ad or announcement for. Possibly a band, but hey what a name!

It’s been a pretty quite and easygoing day, I had a late night last night so planned on playing hooky today. While I usually use days off to be “productive” I realized that a lot of my usual chores are done, laundry’s good, still plenty of shirts laundered, the grocery stores didn’t really have any of my usual staple on sale, so I ended up staying around the house, catching up on tv, tidying up a little bit and succumbing to plenty of naps!

I did run into Jhim when I headed out to pick up some food for lunch, it’s probably the first time I’ve been walking along Mt. Pleasant and was stopped by someone I actually know. Even though he’s just living right up the street, it’s easy to forget he’s nearby when our schedules don’t mesh.

I watched the first season of Tim and Eric Awesome Show, Great Job! It’s hard to say exactly why the show is so funny. It’s very surreal, not at all like Tom Goes to the Mayor, but includes some of the live-action stuff seen on screens in the show.

Another in a long line of crazy condo board decisions is going into effect tomorrow. They’re closing the trash rooms on each floor and in the basement. This is in an effort to get the pest and rodent infestation under control. We haven’t really had any word on whether the other efforts have borne fruit, but we’re still without a storage area and it’s been more than a few months. Now taking out trash and recyclables will mean a trip down to the trash cans behind the building. Generally when I do chore/tidy days, a lot of that is bagging up trash and clutter and tossing it out, so it’s nice to have it right across the hall. Now it’s just going to be a pain.

The best part is the last part of the letter advising all that they understand it will be an inconvenience for some, but a hardship for others. Namely our elderly or otherwise incapacitated residents, who I would imagine are not pleased about this at all. Add to all of this that we’re still down to one elevator. The second elevator keeps appearing to be repaired, but not. Tuesday afternoon, a neighbor and I got on the car and pressed the buttons for our floors and the door closed and the elevator just sat there. Took us a moment to realize that it wasn’t moving, but at least the door open button was working so we weren’t trapped. That wouldn’t have made for a fun evening at all.