Let the sunshine in… 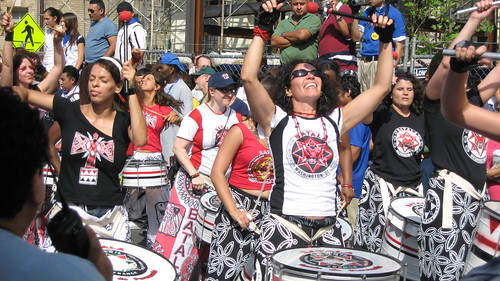 Gorgeous day yesterday in between the rainy bits. Unfortunately the rainy bits made the sunny bits kinda gross and muggy, but it was still a nice day. I didn’t manage to get good photos like last year because the parade security was bad, and people just don’t care any more. You’ve got performers with flying capes, dresses, costume parts all twirling around and smacking spectators in the face because people won’t move back. Plus the first aid booth was right across from the site of the five-alarm fire, so the street was narrow due to the barriers and people were crowded in front. The parade outfits weren’t all that different from last year and the parade was moving really slowly–there were two times people thought it was over–so I put the camera away since I was just getting the backs of people’s heads and one photographer that noticed the best vantage point was right in front of where I was standing.

Overall the festival was fun, but the same as last year and the year before. It’s sort of the same problem one notices with Pride and similar annual festivals. You have food vendors, musical/dance acts, community groups, political candidates, local services like banks/credit unions, big businesses–the FedEx booth had Guitar Hero, that was kinda cool, and cheap crap vendors–an oversized inflatable Superman-themed Justice League-branded mallet, anyone? People come down and walk around all day, and I mean all day, there were people who I saw at 11am that were still walking around at 6pm. Aside from the people-watching opportunities, there wasn’t really much different about it than previous years. Not that it wasn’t fun, but it’s easy to see why such things become easily skippable as the years go by.