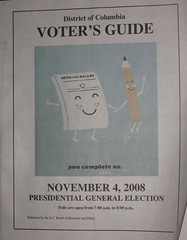 A little retro touch on this year’s November voting guide from the District. I could almost imagine that little ballot and pencil singing a cute little ditty until I read that you complete us crap.

And as a few people around the net have stated–Hello, Negro and Mr. T in DC among them–within the first few pages the guide reminds you of the election law that may become an issue this year. Basically, leave your political candidate t-shirts, pins, paraphernalia at home, in your bags, covered up, etc. Showing up to the polls in your stylish Obama tee or with McCain/Palin tattooed on your forehead will cause problems in DC and Virginia. The current law is that you’ll be asked to remove the items or cover them up, but why take chances on an overzealous poll worker or security guard? The only similar restrictions in Maryland are for poll/election-related workers and volunteers.

This seems like a no-brainer to me, you’re not just showing support, you’re campaigning… inside the polling station. And while I was surprised at how many voters were still undecided by the time the debates had rolled around, if you think you’re going to sway someone on the 4th, you’re fooling yourself. David Sedaris has this to say about undecided voters:

To put them in perspective, I think of being on an airplane. The flight attendant comes down the aisle with her food cart and, eventually, parks it beside my seat. “Can I interest you in the chicken?” she asks. “Or would you prefer the platter of shit with bits of broken glass in it?”

To be undecided in this election is to pause for a moment and then ask how the chicken is cooked.

That’s a wall of ignorance you simply ain’t gonna break through.

Also, thinking about the illustration they used, that cute little anthropomorphized ballot is asking you to take a sharp pencil and draw all over it to express yourself. That ballot is a nasty pig and a dirty whore… I like that! 😈