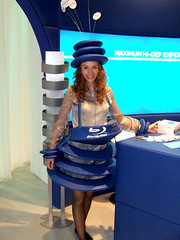 I blame my father. He bought two high-definition tv’s for their house, refurbished, but still very good sets, and the Blu-ray discussion came up. I’ve always been fairly non-stressed about upgrading my DVD player, even after conversations with friends and seeing movies in Blu-ray via a PS3. But somehow, it got into my brain over the holiday, perhaps because I figure I might be able to get a good deal on a player in some post-holiday sales.

The increase in video quality made me think back to my brother’s advice to me after I bought an HDTV for my apartment. He told me that I would enjoy everything and never go back to watching standard definition broadcasts, but moreso… he told me I would even enjoy NASCAR:

That pretty much sums up my feelings about NASCAR both before and after seeing it in high-definition. And all I can think about now is how good movies would look in Blu-ray on my TV. Even though I don’t often buy DVDs, there are certain movies and series that I would really like to see on Blu-ray, Planet Earth for one, but I’d hardly go through and replace my entire back catalog of DVDs.

So let the browsing, review reading, and shopping begin. I’m already pretty lost, so recommendations are welcome. I have no plans to buy a PS3, however, so I’m not even considering that. I can definitely feel my gadget lust rising again, 2008 was a year to be good, get out of debt and work on my savings & credit. Perhaps 2009 will be, at the least, a year to treat myself.