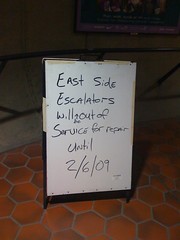 So after a sick day and a little cheer about the new/changed 43/42 route, I get to my “office station” to see this. All 3 escalators at the non-stadium side of Navy Yard have been out for a few weeks now. At first, they put up the pre-printed yellow vinyl repair sign on the middle escalator, as that one actually had the steps removed for repair. But they had to get a sticker to plaster over it as the sign was pre-printed with a 2008 date. Even so, we could understand why the dismantled escalator wasn’t moving, but the two on either side have looked just fine, just non-moving. This week, it was clear that people had enough as I saw more people headed to either the stadium side, with functioning escalators, or the elevators which are now packed every morning.

I’ve pushed myself to make the escalator walk each day, trying to classify it as exercise, but damn if it doesn’t catch up with you when you’re about ¾ of the way up. And clearly I’m not alone in this, as I’ve seen anyone who isn’t a gym-goer poop out right at the same spot. Their stride completely breaks and they’re mere moments from bending over at the waist and taking a few heaving breaths. If not for the line of people behind them, they’d probably stop and do just that, but instead the very confident “I can do this!” stride becomes a walk not unlike that of a petulant 3-year old who’s tired of his mommy going from store to store and really just wants to go home*: stomp, stomp, stomp.

Still, the vinyl banner originally advertised early January 2009, then late January 2009. Now it looks like they’re just pushing that date out again, this time with a dry-erase board. Clever!

* Yes, that 3-year old was me. Believe it or not, there was a time when you couldn’t get me near a mall or department store to go shopping… a very brief era, indeed.