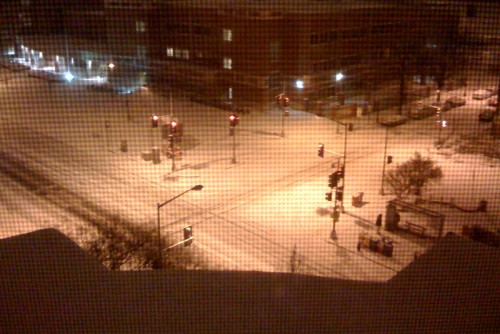 So, it’s finally here. The big one. Woo. Hoo. That was snapped at 5:45 this morning. Michael and I were kinda skeptical about the snow last night and I woke up thinking “Oh there won’t be any big deal!” By the time I was dressed and heading out, it was like walking through an urban arctic tundra. No metro delays when I left, though Green Line trains headed north had tons of snow and ice on them when they arrived at my station.*

I’d probably be more enthusiastic about it if more places had actually closed today instead of just delayed/unscheduled leave. I’m sure most places are just afraid of President Obama calling us wimps again. But I’m here at the office, in jeans and my snow shoes** and it’s pretty much quiet/dead in here today. That’s fine by me as I can get a lot more done when there’s no one here.

* Dear Metro, when it’s 21° outside, don’t keep your trains and stations at such toasty temperatures. Your riders will start steaming in their own juices and it ain’t pretty.

** By snow shoes, I mean my most battered pair of Kenneth Coles. Every year one sturdy pair is designated as the scuffable, soakable, saltable shoes that will see me through DC’s snowy/icy/rainy seasons.