theatre: Looped at the Lincoln

I can usually count the number of plays I see each year on one finger, but I’m starting to think it’s time to change that. I saw Arena Stage’s “Looped” last night at the Lincoln Theatre with my friend Greg and it was wonderful. If you have the time and the means, go see it, it’s funny and conveys a surprising but necessary lesson: Live your truth and be who you were meant to be.

There are plenty of reviews of the play out there now and I didn’t take any notes of my own, so I won’t spoil anything. It’s inspired by and based around an actual event–in 1965, Tallulah Bankhead took eight hours to re-record some lines for her final movie. The play breaks it down to her coming in to loop one line with the film editor and as time passes, she gets quite looped on her own via casual drinking and drug use. As the play moves into the endgame, you realize that not all is what it appears to be on the surface and that Tallulah, even with her scandalous and promiscuous life, can still become teacher, mother and even confessor. 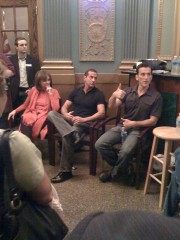 I’m sure it makes me a bad gay to admit that I only knew of Bankhead by name, and was pretty unfamiliar with her work and reputation. Valerie Harper, on the other hand… who could forget Rhoda Morgenstern?! We lucked out and got tickets just the right distance from the stage and when she appeared, it was Valerie until the applause died down and then she really did become Tallulah.

The play’s about 2 hrs long, including intermission, but I barely even noticed the length–a sign of a good play, for me. It was also Out At Arena night, so after the show there was a Q&A with the cast and playwright. I believe they’d planned on a small reception, but as the rain was pouring outside, a lot more people stuck around. I also think some people are just tuned into the words free reception. There wasn’t time for too many questions, and most in the crowd were just a little starstruck by Valerie, but the moderator did a good job of letting the playwright and co-stars get a few words in.

It’s on through June 28 and it’s a really a good time. Ticket prices were discounted that night, but if you aren’t a stickler for being right up close to the stage, the balcony seating wouldn’t be bad. The balcony doesn’t hang out over the orchestra seating, instead starting at the back of the house with a fairly low slope. But with this play, I would say that it’s much more about the dialogue than the stagework.

Of the many one-liners, zingers and universal truths thrown around last night, one line really stuck with me:

There is always going to be pain in life. But suffering? That one is optional.