theatre: An Evening with Lynda Carter

Rounding out my week of 70s* favorites, Michael and I saw Lynda Carter at the Kennedy Center. It was difficult for my brain to think anything other than “We’re going to see Wonder Woman tonight!!” I’d also forgotten how much fun it is to go to see things at the Kennedy Center. Even if the show is horrible, just riding or walking to the building, walking through the huge halls, maybe spending time on the terrace is so much fun. I’m going to have to take advantage of their free evening events more often.

Lynda just released her first CD, 30 years after her last album**, and it’s good. It falls firmly in the “Jazz/Vocal” category but there are some Motown and blues tracks as well. I was looking forward to seeing her live, because while the CD showed off her vocal talents, there were some tracks where she was buried by the accompanying music. The live show suffered from the same problem on a few songs, which was evident by hand motions from nearly all of the performers onstage to the sound guys to even things out. Even so, it was a very entertaining evening.

I was surprised that it wasn’t both sold out and that the queer contingent was nowhere near as large as expected. Michael and I made a friend on the shuttle over from the metro, but otherwise, it was a very mixed crowd. One surprise for the audience and even to Lynda was the attendance of Cal Ripken, Jr! She’d also made some arrangements to give free tickets to some Army service members, so it was a feel good evening all-round.

She maintained the cabaret feeling throughout the night, telling some stories, reminiscing, appropriately segueing into songs. She did the Wonder Woman spin, only a few times around, thankfully since after a second it looked like she was about to fall. And she also had a bit*** about how her sax player, “Blue” Lou Marini, was both an original Blues Brother the inspiration for the sax player in The Muppets’ band Dr. Teeth and the Electric Mayhem. Not to be outdone, she then pointed out that she was not only on The Muppet Show, that she’s also been a doll, a bobble-head and a Barbie.

I’m now hoping that she’s done a recording of one of her live shows to be released later or in a special set as it was a really fun time. She came back for two encores before throwing in the towel. As I haven’t been to the Terrace Theater before, I don’t know if it has a particular sweet spot, but based on her arrangement, I’m not sure Michael and I were in it. 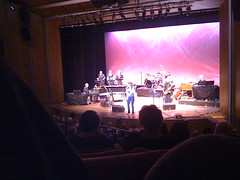 We weren’t supposed to take pictures, of course, and I am usually a “performer’s rules”-follower when it comes to such things. But by her last numbers the flashes were going off and camera-phones were being whipped out. I used my playbill to block my iPhone’s screen from the ushers and my knees were a makeshift tripod. The pictures aren’t perfect, but good enough for me. The ushers were cracking down on a few patrons, but they didn’t attempt to confiscate any devices.

Between Wednesday and Friday, my theatre/concert budget is maxed out for June, but we’ll see what opportunities July brings!

* That gave rise to many “you know you were gay if…” conversations.†

** Which one of the audience members had with them… on vinyl

*** Which she kinda flubbed, but saved herself

† Always followed by “your parents should have known you were gay if…” conversations.