One of the best things, in my opinion, about Restaurant Week are the lunch options. In deference to many DC workers that have to head back home to the burbs after work, it’s nice that they have the option to enjoy an upscale lunch without breaking the bank. We used to arrange an office lunch outing during Restaurant Week, but as the only one that ever seemed aware of RW, I got tired of making the arrangements–I’m not a born party planner.

I’ve walked past co co. sala many times, usually trying to nudge whoever’s with me to pop in and getting choc-blocked* or on my way to Cowgirl Creamery. Never been inside, but have heard from a few people that I should go, so when it was offered up as one of the RW tables for lunch, I was happy to snag a seat. Their RW menu was smaller than most I’ve seen for lunch, but after a look at their usual menu, it wasn’t missing too many options.

The inside is just too cute! It’s definitely bigger on the inside than it looks from out on the street. The initial chocolate bar/bar seating area was nice, but the seating arrangement wasn’t to our liking, so we were re-seated in the right-side dining room.

Even though Steven sent me the menu ahead of time, I tried not to look at it too much to avoid get overwhelmed by the choice, but I spied Burrata on one of the salad options and that was a done deal. I haven’t been anywhere that served this in a while, it’s like a truffle but made of cheese. The tomatoes did a valiant job of providing cover, but I manage to find the cheese in there and it was delicious–a drizzle of balsamic vinegar on top with a light coat of olive oil beneath.

Steven displayed a little bravery and tried the beet and goat cheese salad. He’s not a fan of beets. I’m not a fan of beets. Heck, after a polling of co-workers, none of them are fans of beets save the husband of one. It’s not really the beets’ fault, we’ve just been exposed to them in the most horrid of ways growing up. This salad came very close to turning around our opinions. It had red and yellow beets with layers of goat cheese in between and the tiny bit I sampled still had that beet’y flavor to it, but the goat cheese provided just enough tangy’ness to cut it. It isn’t the kind of thing I would have thought to try at home, but if a recipe crossed my path, I might be so inclined.

His entree was the mac & cheese tart, mine the spinach feta tart w/grilled tiger shrimp. I can’t really declare a winner between the two of these. The emergence and staying power of mac & cheese in restaurants is so amusing to me. I suspect it’s always been one of those things that says “comfort food” and then chefs asked themselves how they might punch it up. Lobster mac & cheese seems almost too prevalent–delicious, but kind of a cheat. No lobster to be found at co co. sala, but the combination of cheeses and spices made it a treat, even my tiny little bite of it.

My spinach feta tart was delicious, but the bigger star was the creamy dill sauce accompanying the shrimp. I don’t really truck with tarts at home as they’re more something small that you make lots of, but these were fair sized tarts, just shy of tea saucers. I should note that I didn’t ask for salt or pepper at any point during the meal which is very odd for me, but their use of herbs and spices was superb. And the inclusion of cheese in both the salads and the entrees did not go unnoticed–Urb like!

And… apparently this place is known for like, chocolate, or something. I dunno. But I figured since I’d just had a grilled peach salad the other night that I might take a chance on their chocolate tasting or whatever. 😉 One word: OMG. I’m not even that much of a chocoholic** but really you can’t go to co co. sala and not try the chocolate. I was actually relieved that a place known for their chocolate didn’t try to add chocolate into their other, more savory dishes.

We were told that this was the “small” version of the tasting which usually has 5 types of chocolate. They brought us a white, milk and dark chocolate in solid, semi-solid and liquid forms. The advice for the palette was to try each chocolate at a time: solid, semi then liquid. Good advice, as you can really detect the differences each style gives each type of chocolate. I believe the term mouthgasm was coined for moments like this, especially when you let the semi-solid chocolate warm up and melt on your tongue… it definitely veered into PG-13 territory for graphic scenes of explicit culinary enjoyment. 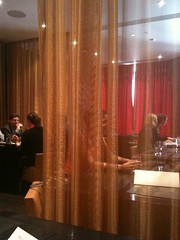 My only advice to Restaurant Week establishments and restaurants in general: prompt table-clearing service is appreciated, but be sure to ask before removing a plate. Even if it looks like the patron is finished, we will stab you if you don’t give us the option of finishing that last nibble of cheese or swirling up that sauce with a piece of bread. You hear me? Stab. You. Especially when there’s still some chocolate left at the bottom of our shot glasses. Let me cast off my dignity and attempt to slurp up those last few vestiges, ok?

Chances are unless you like eating lunch at 11:30a or 2p, you won’t find many other openings for lunch this week, but there may still be some spots available for dinner, and that menu looks pretty amazing as well. co co. sala is definitely offering up a deal for RW, and it will likely bring them lots of new and repeat business. I’m already thinking of heading back soon for the Chocolate & Bubbles happy hour!

* Usually only by their ignorance of what awaits us inside.

** I should clarify that I do like chocolate, but I always end up encountering a chocolatier that ruins me for all others until I find another chocolatier with even better quality stuff. It’s a tragic never-ending cycle… of chocolate.