night out: The Two Towers at Wolf Trap

I really wish I’d mentioned this sooner so people would have had a chance to make plans to go. A few weeks ago, I won my company’s ticket raffle for Wolf Trap tickets to see The Lord of the Rings: The Two Towers “performed live” with an accompanying orchestra, choir and soloist. The available tickets were quickly snatched up by friends and I have to admit that I wasn’t really looking completely forward to it. Seeing a 1-2 hour concert is one thing, but sitting through a 3 hour long movie starting at 7:30pm? I was sure I’d fall asleep before it was done. 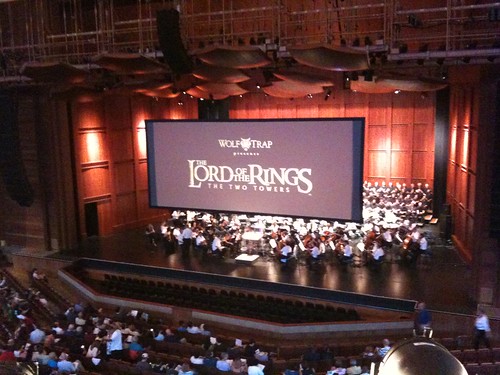 How wrong I was! It was somewhere between cool and muggy out that evening. Rain loomed on the horizon, but it was quite comfy to be outside–especially in the company’s box seats! Even so, I almost wish I’d been on the lawn except we might not have been able to see the orchestra & choir. But the crowd was very into it, applauding at various points–most of which were of Legolas being badass. Even with one intermission, the evening passed pretty quickly.

One benefit of having seen the film was that I could focus on the musicians and singers. It becomes extremely clear how the various musical themes in the film surround various characters (even The One Ring). It’s no Peter and the Wolf, but certain themes like that of the Shire and the Hobbits are unmistakable even with variations added to match the scenes in which they appear.

It didn’t seem to make any sense to take photos of “a movie” but I captured a bit of video before the start and during the end credits, mostly to test out my iPhone and Facebook’s new iPhone application.*

This was the U.S. Premiere of the show, so I can hope that it might be back around before the end of the run and I look forward to The Return of the King hopefully next year! It was definitely a geek or music lover’s event, but a lot of fun and a great way to spend a pleasant Summer evening. A bit like a drive-in without the car!

* It was ridiculously easy to upload video to Facebook and fast via 3G.