A delightful bit of spam* seen while making the afternoon e-mail check:

We write to confirm if there will be any response from any of your relations concerning what we just heard from a man named Mr. Paul Johnson about yourself. He came to our office last week and informed us that you are dead and during your illness you willed him to claim your US$950,000.00 compensation that the Federal Government mapped out to compensate those that were defrauded by the impostors in our local banks here in Nigeria. 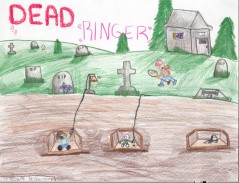 For that extra bit of realism, it refers to a six-year old United Nations press release though I was unable to determine how that information applied to the scam they were running on me. I love how all of the employees referenced in the message have hotmail.com addresses, but the best bit is:

Failure to reply back in the next 24hrs simply means that what Mr. Paul Johnson said is true that you are dead.

I know that we’re moving more and more into the digital age, but I’m pretty sure that someone’s own death isn’t something we’ll try to confirm via e-mail.** Though perhaps I should set up an script now to update Facebook and instant messenger status and send a note to twitter in the event of my untimely passing…

* Also very classy is that it was forwarded to the sender twice before being sent along to me and each one has a warning: “the attached message was determined by the Spam Blocker to be spam based on a score of 17.2 where anything above 3.3 is spam.”

** Though I’m fairly sure the shock of a perhaps 90+ year old relation getting an e-mail that says, “Dear Aunt Janice, I’m just writing to ask how you’re doing and make sure you haven’t died.” won’t be good for their health… or your consideration in the will.