This is less of a blog entry and more of a public service. When you follow restaurants and other food-related businesses on twitter, let it be at your own risk! It’s bad enough following and chatting with my fellow foodies during the day as we get to trade tips and deals back and forth, but I’m also following a few local restaurants and therein lies the trouble. 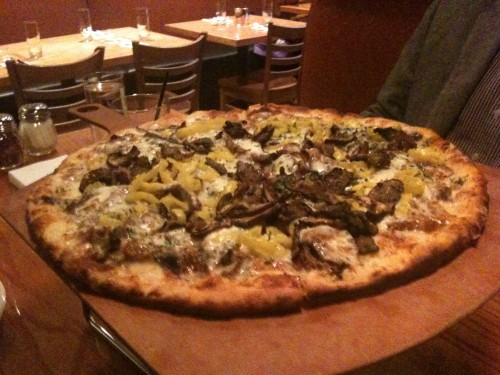 After surviving a birthday happy hour last night for Thrifty DC Cook and the subsequent 2-for-1 cocktails at Halo, I was sort of slugging through the day with a serious craving for pizza. So I thought I might knock off over to Matchbox on Barracks Row for lunch. Since I’m following their twitter account: @MatchboxDC, I noticed their daily posted soup and pizza specials and there was no question I’d be heading over. After a failed plan to meet up with some friends, I aimed to head out on my own, but some co-workers decided to come along with. 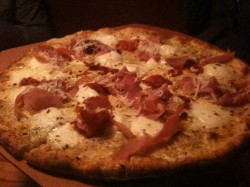 We split their Steak and their Serrano Ham/Pecorino Romano pizzas–and 6 mini-burgers–and were completely satisfied. Generally my team doesn’t take long lunches, so getting out of the office is a treat for us. The service at the Barracks Row Matchbox is always friendly and patient with us even when we have a larger group. My only complaint about Matchbox and it isn’t severe is that it sometimes seems like the food can take a little while to get to the table. On the few occasions that we haven’t gotten appetizers, our stay seems like it’s much longer than just the hour we’re there. But overall, it’s a great choice for lunch. They also tweet their nightly dinner and weekend brunch specials. They really get how twitter can help their business.

So as we’re in the office and post-lunch full & sleepy, I catch up with friends on twitter making them jealous with my pizza pics. I got the heads up that Curbside Cupcakes is heading down near my office. I confess to a wee bit of teasing them as I’ve seen them posting their locations to twitter and Facebook and I was a bit vocal on twitter asking why they never visited my part of the city. Ok, I pouted, I ain’t too proud about it, but it worked! 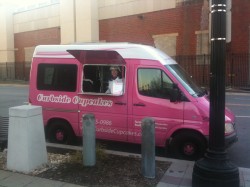 I hung around the office, tracking their updates and waiting for them to announce their location. It was right on my way home! When I left the office, I could see the pink mini-van in the distance and what most surprised me was the number of people walking right past them to the metro. However we did talk for a while after I bought my dozen cupcakes, and it really wasn’t the best time for them to be there. At that time of day, most people were thinking of heading home and as we know, WMATA frowns upon eating on Metro trains!

I picked up a nice assortment of cupcakes, and they insisted I taste one since I’d never had one before. WOW! With the icing they’re yummy, but I purposely avoided it on my second bite and the cupcake itself was moist, tasty and sweet. Everything you’d expect from hand-mixed, homemade cupcakes. Yeah, they don’t machine mass-produce these and it’s apparent from the look and taste–in a good way! 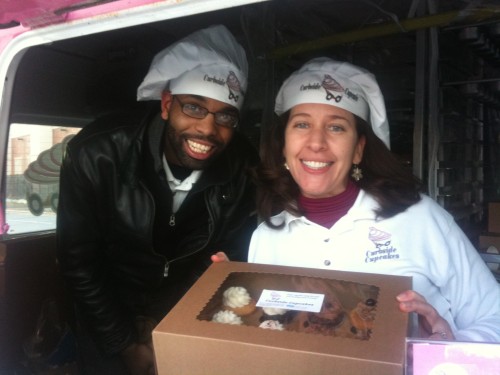 As delicious as the cupcakes were, just as much fun was talking to them about what they do and it’s really apparent that they love it. Another customer drove up to the van and they recognized her from yesterday–she’s stalking them! And not to toot my own horn, but they totally called me out as the reason they came to that part of town. I’m not saying pouting always works, but… don’t discount it! 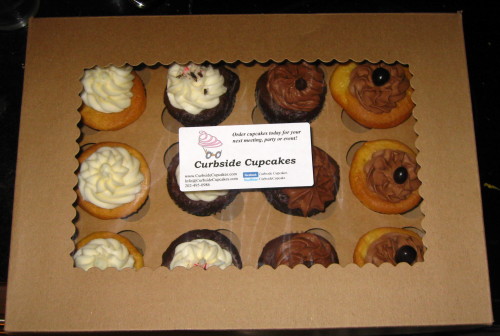 So the lesson is that if you have favorite local restaurants, check out their social media accounts. A lot of newer restaurants are on twitter, but others maintain Facebook pages while others prefer to monitor their Yelp pages. Check out the places’ websites to see if they’ve embraced the social web. The people making the updates are usually very friendly and responsive and it’s a great way to let places know how much you enjoy their food and service.

It’s also a great way to keep yourself stuffed throughout the day. No complaints!