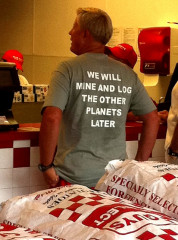 Fatigue caught up with me this weekend and I wasn’t feeling very well, so I didn’t make it outside that much save a food run or two. I didn’t really mind considering the masses descending upon DC for either the rally or the counter-rally or whatever. Since visitors had already been warned off the Green Line and I live in Southeast, I didn’t think I’d encounter very many even with a Courtyard Marriot nearby. Still, I did have a slight brush with them when I went over to Five Guys to satisfy a french fry craving.

Even though the guy with the flag sticking out of his cap gave me the stink-eye, his friend’s t-shirt said “Earth First” on the front with a picture of the globe and my internal guard relaxed ever so slightly. Until he turned around:

We will mine and log the other planets later.

Still, only encountering two fairly harmless attendees in the city seems far better than most people I heard from. Welcome to Monday, folks!