This is more for the gay geeks out there. I mean the proper gay nerds, not the ones who lately think it’s “cool” to call themselves nerds because they really liked Firefly or The Big Bang Theory.* It isn’t directly related to a Pride event, but anyone who reads comic books can not deny that the recent War of Light had more rainbow power in it than the entire run of Sailor Moon. 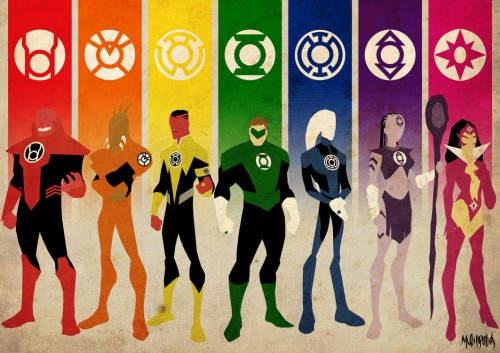 I was never much into Green Lantern before that. His powers and the whole intergalactic police force thing were cool, but his villains weren’t and frankly it’s the villains that make a hero cool. Plus as soon as you got used to one Green Lantern, there was another one… and another one… and so on.** Still when Geoff Johns took the Green Lantern mythos in a new direction recently explaining that there was not only a Green Lantern Corps, but an entire spectrum of Lantern Corps–each linked to a specific emotion–it got a little more interesting than Hal Jordan and Sinestro flinging green and yellow bolts at one another… and it got a lot more gay. 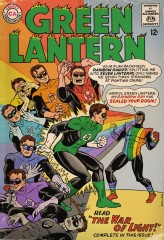 All kidding aside, it was a very fresh take at a time when many of the classic comic titles had maybe started to get stale.*** But Comics Alliance poses an interesting question and wonders what it might have looked like back in the Silver Age.

When a mysterious ray splits him into an entire rainbow of crime-fighters, the Emerald Guardian finds out just how much trouble he can cause when his emotions take on a life of their own! We hope he’ll be able to deal with this rage, but we fear he might end up dead! Don’t miss this incredible three-part spectacular, complete in this issue!

With some amazing art by Kerry Callen, I could see running across this in a vintage comics bin. The Rainbow Raider was more known for being a villain of The Flash, but with a costume more appropriate for being flown atop the Richmond Federal Reserve than taking on one of the Big 7, I’m sure he’ll take all the appearances he can get!

I’m not ashamed to admit I own all of the War of Light t-shirts (example) and they look darn cute on me, too! But when I’m out and about, they’re a nice way to show off one’s geek pride without being too obvious about it… unless BBT has already done a special episode on them and ruined that for nerds too.

* It was bound to happen, as with every other shunned subculture, but nerdity is not only cool, nerd culture is a commodity. Meh.

** With the standard death, rebirths, re-deaths, etc. that come with being a big name comic title.

*** Or not. Depends on which comic book geek you ask.