La Tomate in Dupont Circle has always felt like an institution to me. It was often the chosen site of a first, second or third date. Plenty of variety, nothing too over-the-top and good prices on the lighter/pasta dishes. But it’s also so much of an institution that I generally pass it over for the newer places in Dupont because restaurants in DC shift like the tides. If you don’t visit a place today, it might be someplace else tomorrow! And while it’s hardly news in DC to hear of a restaurant group expanding, or starting a new venture, it’s rare that both happen in the same place. 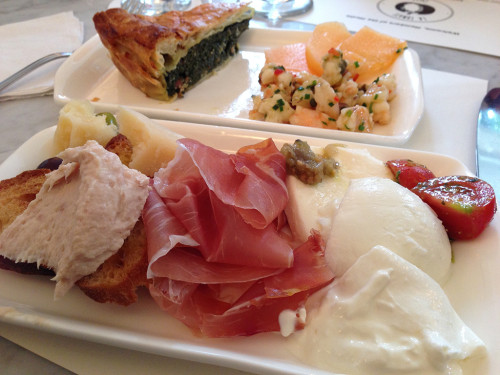 Modeled after a traditional Italian cafe, La Tomate Caffè will be opening this Friday, July 25 as one of a number of changes for La Tomate over the next year or so.

Open from breakfast to late-night, The Caffè will serve brioche and sweets, espresso, coffee and fresh-squeezed juices for breakfast, artisanal-cut domestic and Italian charcuterie, assortments of cheeses, mozzarella varieties and light-fare. A vast array of packaged homemade gastro products, including fresh, signature sauces and soups as well as Italian delicatessen treats, cocktails, wine and beer will be available all day.

Last night, we were given a taste of the new offerings and there weren’t any disappointing items. When I next visit, I know I’ll be torn between the Shrimp Salad with Sliced Melon and the Tramezzino “Letizia” with its truffle-infused spread of prosciutto and ricotta. It makes me wish I worked closer to Dupont so I’d be able to add this as a lunch option. Then again, with the late night hours, it might make a nice alternative to the bookstore cafe closer to the circle. Especially with what some might consider the best part: dessert. 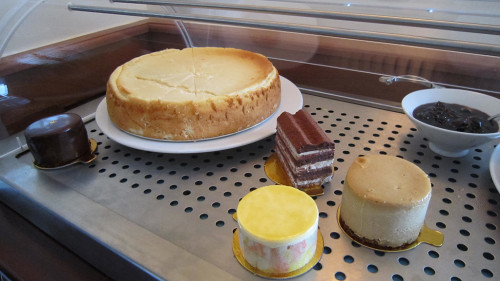 I’m not really a big sweets or dessert person… with one exception: cheesecake. Maybe it’s the influence of The Golden Girls, but there is something about a late-night Nigella-style fridge raid on that pale yellow, golden crusted treasure that can’t be matched. La Tomate Caffè’s homemade ricotta cheesecake, flavored with sambucca definitely hits the spot, and for the chocolate lovers there’s a homemade chocolate cake made with almond flour and cocoa powder, both desserts are gluten-free if that’s how you get down. 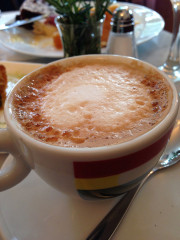 And the icing on the dessert cake… that isn’t cake icing, but is something even better to go with dessert. Though now I’m thinking of a “dessert cake”, would that be cake with even more cake on top of it as icing? Hm. But I digress, to enhance not only the dessert but the cafe experience as a whole, La Tomate has partnered with illy for their coffee and espresso drinks at the Caffe. I am far from being a coffee snob, but outside of locally-owned smaller coffeehouses, establishments serving illy–often partnered with great food–are still able provide that hand-crafted coffee experience at venues that may not be 100% devoted to worshipping the bean.

All in all, I’m happy to see La Tomate expanding in this direction and encourage anyone who may have written them off to give them a visit to check out the new digs and new bites. Again, the grand opening for La Tomate Caffè will be this Friday, July 25th and they will be offering up some complimentary tastings and reduced price specials all day.