comics: What if Peter Parker were Black?

Based off of a musing on tumblr, artist Plintoon draws four panels from a very good “What If?” idea.

A lot of people talk about how it’s time for a “Black Spider-Man” while not nearly as many articles discuss why it might be time for a Black Peter Parker.

I keep thinking how much more powerful the Spiderman origin story would be if Peter Parker was an African American kid, whose Uncle Ben was shot by police while being arrested for a minor parking infraction. There is no formal investigation, and Peter decides to put himself on the line to prevent it happening again. He tackles the white crimes that go unpunished, punishes POC criminals fairly. He is the leveler, always fighting to be without bias, to be just. To protect people like his uncle.

This not only mirrors so much of what’s happening in America, but feeds right into the complex relationship between Spiderman, the authorities and the media.

Peter Parker is a brilliant student, awkward, a nerd, but is branded a thug, a gang member, a criminal, because of his appearance. The media latch on to that and misrepresent him totally.

The police, humilitated by the fact that he refuses to work with them and often punishes cops themselves for brutalizing innocent people, or guilty people who still deserve better treatment than they get, attempt to hunt him down.

–via Jolly Good, on tumblr1 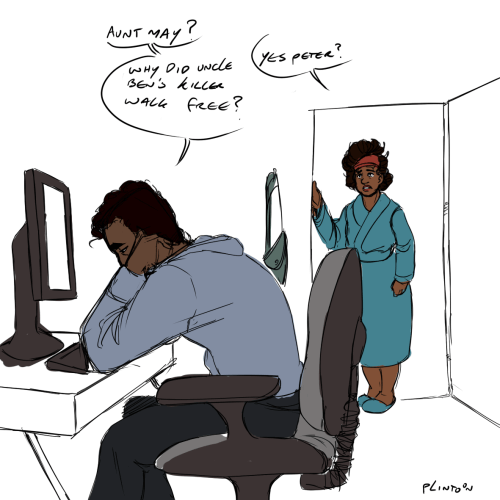 Most of the “What If?” stories about Spider-Man focus on the pivotal moment when Peter’s uncle was murdered and how it affects him, especially as it could be interpreted that it was Peter’s fault for not stopping the thief at an earlier point. Most also end up with him becoming a hero, “great power/great responsibility” etc. But none of them have ever had Peter lose someone close to him because of someone else’s actions. 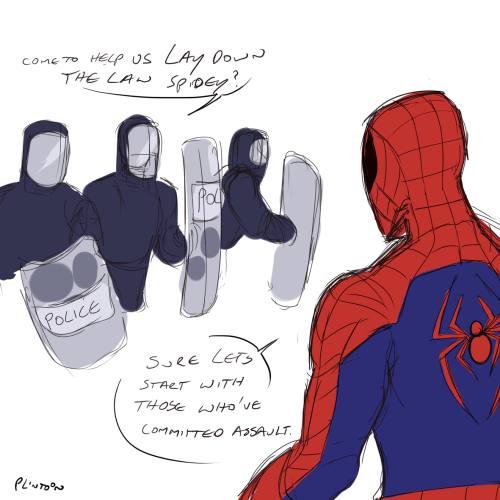 What might that do to Peter’s worldview, if while angry and confused over a senseless loss he suddenly found he had the power to fight back and do something about it? Would he remain a hero or would he become more of a vigilante anti-hero or a straight up villain? An alternate version, the Spider-Man of Earth-138, Hobart Brown, also known as Spider-Punk is a very clear anti-establishment/anti-authority character, but we don’t get much detail on his origins.

The beauty of this idea is that most all incarnations and versions of Spider-Man have been fully covered from head to toe2. With the rare exceptions when the costume has been torn, you don’t know who’s inside. Marvel has played with this idea before with Adam Brashear/Blue Marvel an African-American pastiche of Superman who wore a mask to keep his race a secret from a potentially racist 1960s America. So the idea that the police and media might profile Peter Parker while initially praising do-gooder Spider-Man might add a little something to the story. It’s the X-Men allegory of “a world that hates and fears us” brought more in line with stark reality.

In the end, it’s very unlikely that Marvel will do an “All-New, All-Different” version of Peter Parker as the character is a cash cow and they’ve got Miles Morales waiting in the wings to cover their asses. But still, y’know, what if?

2 They have also mostly been white and male.