all the small things

2016 has worn us all down pic.twitter.com/tKkEXk5Gqo

As is usual for me because I almost never go anywhere, I had a nice chunk of leave to blow at the end of the year. I’ve worked for some companies in the past that were willing to pay out varying levels of PTO, but my current employer wouldn’t budge. Still, that’s a story for another time. The long and short of it is that I spent the last two weeks of the year off.

Normally, I do a sort of “DC Blowout” in that time, but this past year I pared it way down and kept it simple. I did go out a little, but mostly I stayed home and cooked more simple meals, clearing out the fridge and pantry. And I tackled a few chores that usually overwhelm me because I feel like I have limited time to get them done, therefore either try to do too much or too many of them at once.

My biggest culprit for this is laundry… Because I can, I do ALL of my laundry at once and never seem to learn from this mistake. The washer is done too quickly, the dryer takes too long, some things need more time IN the dryer, other things need to be taken out and hung or laid out. Yet my stupid ass tries to do it all like it’s a conveyer belt and I end up with both a laundry traffic jam, and then once everything is finally clean and dry, I’m too exhausted to properly put it all away. Baskets of clean clothes for weeks.

So I stopped. I did one load of laundry in the washer. I put that one load in the dryer. I waited until that one load was done before putting another in the washer. Then I sorted/folded/hung the clothes from the dryer. It seems stupid that in over two decades of living on my own, this has never occurred to me. The worst part? It didn’t really take that much more time than laundry usually takes me! And I had time to decide silly things like sorting my shirts by color and the best way to fold my underwear or socks.1

I admit that having an entire day to not worry about getting ready for work and spending 9 hours away from the house and then coming back home and feeding myself and finding a little leisure time and and and… did help, but it was still a really good feeling and I’ll take it. 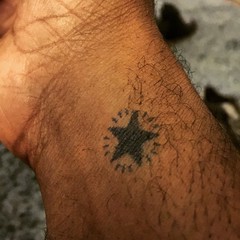 I’m just hoping I can remember this in the upcoming year. I’m sure there are already plenty of “keep it simple” or “think small” organization methods out there, but I guess until I actually did it by hook or by crook, it would never take. And while I have been out for cocktails and meals and brunches and dancing until the wee hours, I’ve also done things a lot smaller at home. My weight is down2, my daily routine is more regular, I’m even coming back to the blog because I know that I don’t have to worry about creating a magnum opus, or an SEO-optimized article. Ok, looking back at over 500 words about this seems a weird way to say that I’m not going to write huge entries, but I guess this maybe has become a bit of a standard for me. 😀

I don’t 100% know what I want to focus on this year, so far it’s just stray thoughts, whispers and inklings. But I do know that — for a few reasons — it’s probably going to be a year I’ll be glad for anything that brings me less stress and more joy.

I hope everyone has had a lovely holiday and new year, and as I already tweeted… Let’s rock the shit out of this motherfucker.

1 I’m trying to keep them in the drawer of my bedside nightstand, but it’s hard to change my old habits just yet.

2 To be honest, I have no idea why it’s down. I don’t think I’ve changed all that much, but I won’t question it.